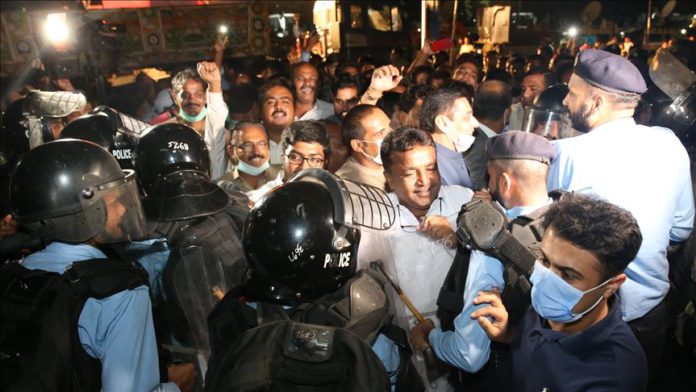 Minor clashes erupted in Pakistan’s capital between police forces and the members of a Hindu community during a protest against deaths in a Hindu migrant family in India.

The protestors assembled on Thursday night outside the Indian High Commission in Islamabad, demanding that a probe be opened on the incident that led to the deaths of 11 members of the Hindu family last month in Jodhpur city of India’s Rajasthan state.

The family had migrated to India from Pakistan.

“We want justice for these eleven Pakistani Hindus who were killed in Jodhpur,” Ramesh Kumar, a lawmaker and Patron-in-Chief of the Pakistan Hindu Council, told reporters.

On Thursday, the Pakistan Foreign Ministry said that despite Islamabad’s repeated calls, the Indian government has still not released the necessary information on the deaths of the family members.

“I wish to reiterate that the Jodhpur incident is a matter of grave concern for the government and the people of Pakistan, particularly the Pakistani Hindu community,” Foreign Ministry spokesman Zahid Hafeez Chaudhri said during his weekly press conference.

“The daughter of the deceased head of the family, Shrimati Mukhi, has made highly concerning statements, implicating the Research and Analysis Wing (RAW) [India’s foreign intelligence agency] in the murder of her father, mother and other family members, allegedly after the agency failed to convince them to spy on Pakistan and issue anti-Pakistan statements,” he added.

He urged India to carry out a comprehensive and transparent investigation into the matter and share its findings with Pakistan immediately.