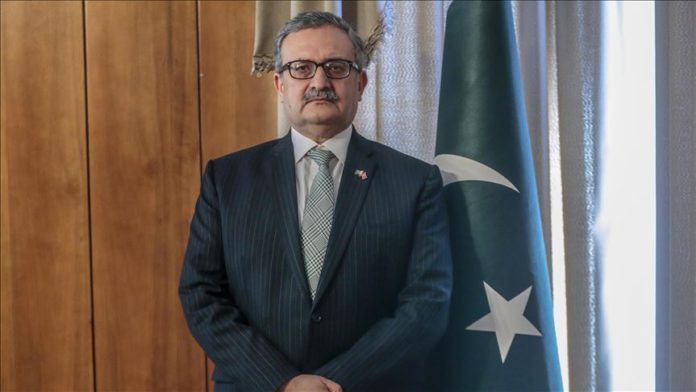 Pakistani citizens living abroad should raise awareness about the plight of people in Jammu and Kashmir, which was annexed by India and reduced to a centrally administered territory a year ago, Pakistan’s ambassador to Ankara said on Wednesday.

Muhammad Syrus Sajjad Qazi’s comments came at an event held in the Pakistani Embassy in Ankara where Youm-e-Istehsal, or Day of Exploitation, was marked with participation of officials, journalists and diplomatic representatives.

The Pakistani administration declared Aug. 5 as Youm-e-Istehsal to protest against the Indian government’s actions in Jammu and Kashmir, which Islamabad says are aimed at changing the demographic structure of the Muslim-majority region.

“In individual capacity, people [living abroad] can highlight the plight of Kashmiris, the injustices being done to them in illegally occupied Jammu and Kashmir; and they can make friends, acquaintances in Turkey aware of what is happening in Kashmir,” said Qazi.

Pakistan’s top diplomat in Ankara said all human beings who attach importance to justice, freedom, and fairness should be “outraged by what is going on in Indian Illegally Occupied Jammu and Kashmir,” adding “Pakistanis should remain firm and let counterparts, interlocutors know about developments” there.

When asked about the stance of the Turkish administration with regards to developments in Kashmir, the diplomat said both Pakistan and Turkey had a very long history of standing with each other and they supported each others’ causes and positions in a variety of international issues and Kashmir was not an exception.

Referring to the developments in February 2019 when India and Pakistan came at the brink of war with the international community being concerned of a nuclear escalation, Qazi said Turkey quickly took action and advised both sides to exercise restraint.

“Turkey imminently and sensibly advised de-escalation, meaningful dialogue, adherence to the international law and UNSC resolutions, and also offered mediation to Pakistan and India, which of course was accepted by Pakistan,” he said. “This is a sensible approach that needs to be applied to the issue of Jammu and Kashmir and other countries should take a similar position so this issue is resolved.”