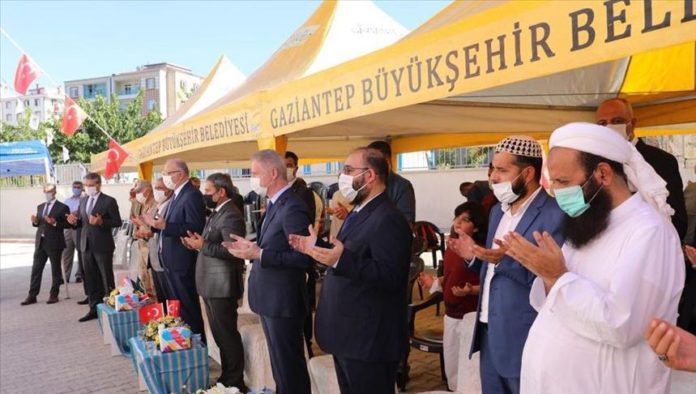 A Pakistani charity has helped establish a school for Syrian children in southeastern Turkey.

The primary school, which opened on Monday in the Gaziantep province near the Syrian border, has been funded by Pakistan’s Baitussalam Welfare Trust with the support of Kuwait’s Said association, said Ali Sahin, the chairman of Turkey-Pakistan Inter-parliamentary Friendship Group.

“Thanks for my Pakistani brothers for being in Gaziantep,” he tweeted.

Today we have opened the Intellect Primary School constructed by @Baitussalam_Org and Said Association of Kuwait in Gaziantep for Syrian children. Thanks for my Pakistani brothers for being in Gaziantep… pic.twitter.com/I0jdL9v18S

The project is part of the “100 philanthropists in the 100th year” campaign which marks the centenary of Gaziantep’s liberation.

Gaziantep Governor Davut Gul said nearly 500,000 Syrians live in the Anatolian province, and there is a need for more schools.

“On the instructions of President Recep Tayyip Erdogan, 4,000 classrooms were made through state means. Some of them are still under construction, but we need another 4,000 rooms, and are trying to fill this gap with the support of philanthropists like you,” he said during the opening ceremony.

Sahin, who is also a member of the ruling Justice and Development party, said Pak-Turk friendship is unique.

“Today we are opening our ninth school across Turkey. Thank you for your support,” Mahmoud Alouiss of Said association said.

Abdus Sattar, the head of Baitussalam trust, also thanked those who gave them the opportunity to contribute.