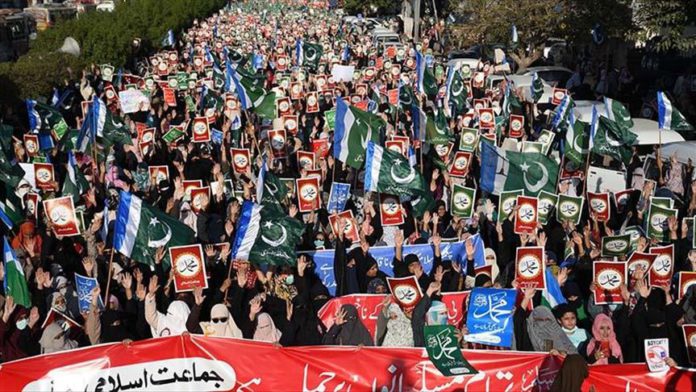 Hundreds of women marched in the southern port city of Karachi on Tuesday against French President Emmanuel Macron’s anti-Islam remarks, and publication of cartoons insulting the Prophet Muhammad.

The rally was organized by the country’s mainstream religious party, Jamaat-e-Islami, which has launched a nationwide campaign against projection of the blasphemous caricatures on government buildings in France.

Addressing the rally via video link, JI chief Senator Siraj-ul-Haq said the recent events involving French authorities have hurt the feelings of millions of Muslims across thee world, who can bear “everything, except for the blasphemy of Prophet Muhammad.”

Demanding the expulsion of French ambassador from Pakistan, Haq urged the Organization of Islamic Cooperation (OIC) to call an urgent meeting to delineate joint strategy on the matter.

He also called for boycotting the French products.

The rally coincides with a rising trend of boycotting the French products in the South Asian nuclear states as dozens of store chains joined the nationwide campaign.

In Karachi, the country’s commercial capital, nearly two dozen major store chains have either removed the French products, mainly fashion and food products, from the shelves or marked them with “not for sale” tag.

“Trade is our bread and butter but the honor of Prophet Muhammad is above everything,” Ahmed Hashim Noorani, the owner of Bin Hashim store chain, which pioneered the boycott campaign in Pakistan, told reporters.

“Consumer response is positive as well. They themselves are not buying the French products,” he said, adding that shelves containing French products at all the branches have been sealed with “not for sale” tag.

Macron’s attitude against Islam, the publication of cartoons insulting the Muslim Prophet Muhammad and their projection on the walls of buildings have triggered boycotts of French products in several countries, including Qatar, Kuwait, Algeria, Sudan, Palestine, and Morocco.