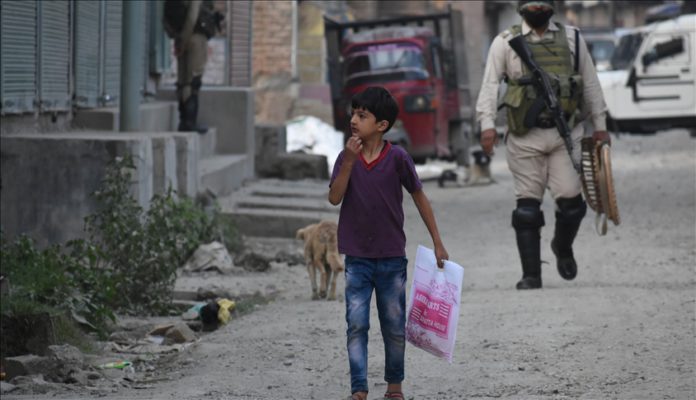 In a written statement to the world body, Munir Akram, Pakistan’s permanent representative to the UN, said Indian forces have been deliberately targeting children with pellet guns, according to daily Dawn.

“The scale and intensity of today’s conflicts is stretching our capacity to protect children,” he said.

“Nowhere is this grim reality starker than in today’s IOJK [Indian-occupied Jammu and Kashmir]. More than 300 innocent Kashmiris, including women and children, were killed in fake encounters and staged cordon-and-search operations.”

Earlier on Tuesday, UN chief Antonio Guterres also raised concerns over rights violations in Jammu and Kashmir and urged the Indian government to stop the use of pellet guns against children.

“I call upon the [Indian] government to take preventive measures to protect children, including by ending the use of pellets against children, ensuring that children are not associated in any way to security forces, and endorsing the Safe Schools Declaration and the Vancouver Principles,” he said while presenting a report on children and conflict in the UNSC.

Pakistan’s Foreign Ministry welcomed the UN report and praised Guterres’ for his efforts to document human rights violations being perpetrated by India in Kashmir.

“Pakistan … reiterates that indiscriminate targeting of Kashmiris with pellet guns, causing excessive and permanent injuries and even deaths, is a clear violation of human rights and humanitarian law,” the ministry said on Twitter.

Islamabad also called on the international community to play its part to help oppressed children in Kashmir, while urging New Delhi to “immediately stop its illegal and inhuman policies and practices that are in contravention of its own obligations under the international law.”