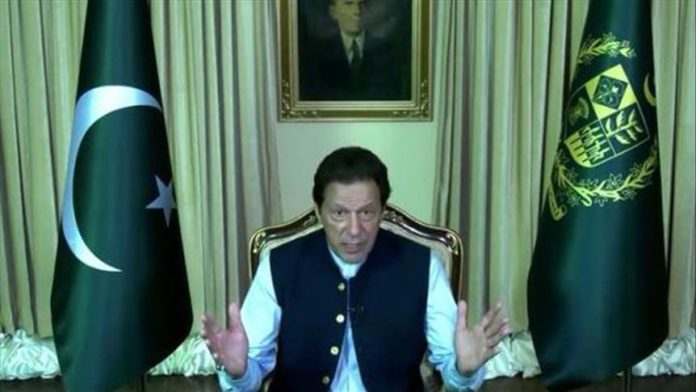 Pakistan’s Prime Minister Imran Khan on Friday urged the UN, and the international community to act to resolve the long-smoldering disputes of Palestine and Kashmir, which posed a threat to global peace.

Addressing the 75th session of the UN General Assembly through video link, Khan spoke in length on the simmering issues ranging from Israel’s illegal annexation of Palestinian territories and alleged human rights violations in Indian-administered Kashmir, and from the rising trend of Islamophobia, to ongoing Afghan peace process.

“International agreements have been flouted and set aside. Conflicts are proliferating and intensifying,” Khan said, urging the UN secretary general to “take the lead in preventing global conflicts,” and convene summit-level meetings to address regional hotspots and resolve outstanding disputes.

Reiterating his country’s opposition to New Delhi’s scrapping of the longstanding semi-autonomous status of disputed Jammu and Kashmir August last year, Khan said: “India illegally and unilaterally sought to change the status of the occupied territories and deployed additional troops, bringing the total number to 900,000 to impose a military siege on 8 million Kashmiris.”

“All of this is well documented in the reports of the United Nations High Commissioner for Human Rights, communications from the Special Rapporteurs of Human Rights Council, statements from human rights and civil society organizations,” he went on to say.

Khan urged the international community to investigate “these grave violations and prosecute the Indian civil and military personnel involved in state terrorism and serious crimes against humanity, being perpetrated, with complete impunity.”

“Changing the demographic structure of occupied territory is a war crime,” he added.

Khan further accused New Delhi of playing a “dangerous” game of upping the military ante against Islamabad in a nuclearised strategic environment.

“Despite constant Indian provocations and ceasefire violations along the Line of Control and the Working Boundary targeting innocent civilians, Pakistan has exercised maximum restraint. We have consistently sensitized the world community about a ‘false flag’ operation and another ill-conceived misadventure by India.”

Dubbing the annexation of Palestinian territory by Israel as illegal, Khan noted the building of illegal settlements and the imposition of inhuman living conditions on the Palestinian people, especially in Gaza cannot bring peace to a troubled region.

“Palestine remains a festering wound. A just and lasting settlement is indispensable, for the Middle East and the world,” he observed.

He said his country continues to support a two-state solution – in line with UN General Assembly and the Security Council resolutions, within the internationally agreed parameters, pre-1967 borders, and Al-Quds Al-Sharif as the Capital of a united, contiguous and independent Palestinian state.

Taking credit for the ongoing peace talks between the rival Afghan groups to bring an end to nearly two decades-long bloody conflict in the war-torn country, Khan urged the Afghan leaders to seize the “historic” opportunity to achieve reconciliation and restore peace in their country.

“I have consistently maintained over the past two decades that there is no military solution to the decades-old conflict in Afghanistan. The only way forward was and is a political settlement which involves the full spectrum of Afghanistan’s political actors, ” he said, adding that Islamabad fully facilitated the process that culminated in the US-Taliban peace agreement in Doha in February last.

“Through the Intra-Afghan Negotiations that commenced on the 12th of September, they must work out an inclusive, broad-based, and comprehensive political settlement. The process must be Afghan-led and Afghan-owned, and without any interference or outside influence,” Khan further said.

Early return of Afghan refugees, he added, must be a part of the political solution. After almost two decades of war, it is imperative not to allow “spoilers” – within and outside Afghanistan – to subvert the peace process.

“Peace and stability in Afghanistan will open new opportunities for development and regional connectivity. New vistas of cooperation could emerge with Central Asia and beyond, ” he opined.

Expressing concern over rising trends of Islamophobia across the globe, Khan called for declaring the “willful provocations” and incitement to hate and violence universally outlawed.

“The (COVID-19) pandemic was an opportunity to bring humanity together. Unfortunately, it has instead fanned nationalism, increased global tensions, and given rise to racial and religious hatred and violence against vulnerable minorities in several places,” he observed.

“These trends have also accentuated Islamophobia.”

“Muslims continue to be targeted with impunity in many countries. Our shrines are being destroyed; our Prophet Muhammed (Peace Be Upon Him) insulted; the Holy Quran burned – and all this in the name of freedom of speech,” he noted, describing the recent violence against Muslims in Europe, including the republication of blasphemous sketches by French magazine Charlie Hebdo, as recent examples of the growing Islamophobia.

He urged the UNGA to declare an International Day to Combat Islamophobia and build a resilient coalition to fight this scourge that splits humanity.

Accusing longtime rival India of “sponsoring” Islamophobia, he drew a parallel between German Nazis and India’s nationalist government, which, according to him, is toeing the extremist ideology against Muslims and other minorities.

Citing the destruction of the historic Babri Mosque in 1992, 2002 anti-Muslim riots in Indian state of Gujrat, and other incidents in favor of his argument, Khan said Muslims were even falsely blamed, vilified and victimized for spreading the coronavirus.

“Cow vigilantes attack and kill Muslims with impunity. Last February, Muslims faced targeted killings, with police complicity in New Delhi,” he said, adding: “Mass registrations in the past have often been a precursor to genocide, e.g. the Nuremburg Laws in Germany in 1935 and then in 1982 in Myanmar.”

He called upon the UNGA to take the lead in efforts to build a global framework to stem the money laundering from developing countries to the rich states, and ensure speedy repatriation of the “stolen” wealth.

Highlighting his country’s success against the COVID-19 pandemic, Khan called for further debt reliefs, and support from the rich countries in the creation of at least $500 billion fund to prop up the developing economies.

Climate change was another issue Khan highlighted, stressing the need for immediate actions to curb this threat “posed to mankind.”

“Unprecedented fires in Australia, Siberia, California, Brazil; unprecedented flooding in various parts of the world; and record temperatures even in the Arctic Circle. This should make us all worried for our future generations,” he went on to say.

“Commitments made through the Paris Agreement must be fulfilled, in particular the commitment to mobilize US$ 100 billion annually as climate finance. ” he added.