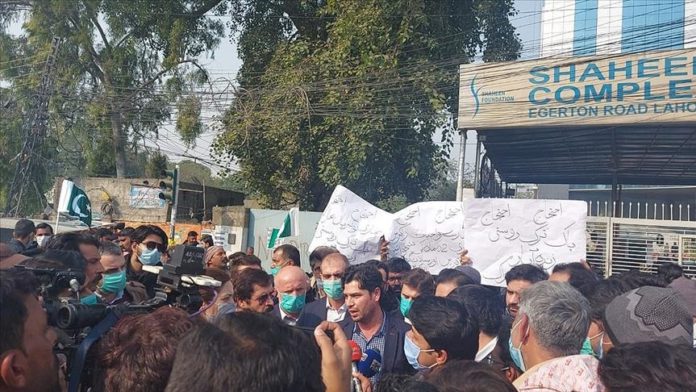 Employees of two Turkish companies in Pakistan’s northeastern Lahore city on Tuesday organized a protest against the raid by the Pakistani police in the garages of the companies.

The police forced the employees and their chiefs out to the streets during the raid. They assaulted some employees in the brawl and did not allow the Turkish staff to take any of their belongings.

The employees of the Turkish companies gathered in front of the Lahor Waste Management Company’s (LWMC) office in Lahore, protesting the police raid and the LWMC’s attitude towards the companies.

The Turkish authorities on Monday said LWMC officials, together with the Lahore police, raided the garages of the companies, the four belonging to Ozpak and the two to Albayrak.

“LWMC said in a statement that they took over the vehicles according to the contract. However, under the contract, Turkish companies have no transfer obligation. Although there is a court order stating that our vehicles, equipment, and garages belong to us, this was ignored,” Ozpak’s CEO Nizamettin Kocamese and Albayrak’s Project Coordinator Cagri Ozel said during the protest.

The garages had a fleet of over 750 vehicles, including garbage removal trucks, lorries and various vehicles, while the police still do not allow anyone inside​​​​​, according to company authorities.

Kocamese and Ozel said that although the service contracts of the Turkish companies with the LWMC would expire on Dec. 31, they entered the garages by force without submitting any written documents and seized everything, also deleted the surveillance footage belonging to the firms.

The police also took away the mobile phones of the Turkish and Pakistani personnel, and deleted the photo and video galleries to destroy the footages, which are “clear evidence that this grave incident is illegal,” they added.

Meanwhile, the police blackened the name tablets of Albayrak and Ozpak in the garages of Turkish companies, according to the statement of the authorities.

Noting that they could not enter their sites, the officials said their vehicles were used and parked outside the garages, adding that even an accident occurred while the company vehicles were being used.

On Monday, Turkish officials said they were asked to deliver their cleaning tools to the Lahore administration through pressure and threat before this date.

The officials also said they did not accept the extension agreement beyond Dec. 31 and did not intend to participate in the new bid as they feel discomfort due to the threats they faced and they were not able to collect their receivables.

A joint press release of the two companies described the incident as “bullying” and “an attempt to sabotage the decision of the leaders of the two countries to increase the trade volume”.

The companies are working to file a criminal complaint against the LWMC.

Diplomatic sources said that necessary initiatives were taken to provide a solution through negotiations between the Pakistani authorities and the companies.

On the other hand, LWMC CEO Imran Ali Sultan asserted that the action was legal and the vehicle fleet must be handed in to them according to the bid, otherwise they would apply for the support of the civil administration.

Turkish company officials noted that they invested approximately $150 million since 2012.