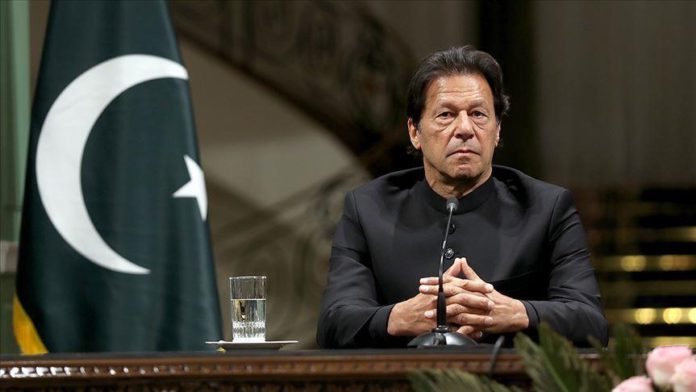 Pakistani Prime Minister Imran Khan reiterated on Wednesday that the relations with Turkey are “exceptional” and highlighted the importance of developing it into a good economic partnership.

“Reaffirming the exceptional nature of Pakistan-Turkey political relationship, the prime minister stressed the importance of transforming it into a robust economic partnership.”

The prime minister thanked Turkey for its steadfast support on the Jammu and Kashmir dispute and highlighted the detrimental Indian actions posing a threat to peace and security.

In the regional context, Khan underscored the importance Pakistan attached to a peaceful solution to the conflict in Afghanistan. In this regard, he highlighted Pakistan’s positive contribution to the Afghan peace process and the imperative for all Afghan stakeholders to work for bringing down violence, leading to a cease-fire and securing an inclusive and broad-based political settlement.

Earlier, during a meeting with Cavusoglu, Pakistani President Arif Alvi called for further enhancing trade and cultural relations with Turkey.

“Pakistan and Turkey enjoy excellent relations and both countries need to further enhance economic and cultural relations for the mutual benefit of the two countries,” Alvi said during his meeting with Cavusoglu, according to a statement from the presidential office.

The Turkish foreign minister said that Turkey is also keen to improve trade relations with Pakistan.

Cavusoglu is leading a high-level delegation to Pakistan on a three-day visit to review bilateral, regional, and international relations. Besides, the two sides will also prepare for the 7th High-Level Strategic Cooperation Council — the highest-level decision-making forum between the two countries since 2009, which will be held in Ankara, Turkey’s capital.

Investments by Turkish companies in Pakistan have grown by over $1 billion, the statement informed.

“The two sides agreed to further solidify and expand bilateral cooperation in the fields of trade and culture.”

Alvi asked the Turkish foreign minister “to convey his gratitude to [Turkish] President Recep Tayyip Erdogan for raising the voice of Kashmiris during his recent speech at UN General Assembly.”

He also appreciated Turkey’s leading role in the global effort against the COVID-19 pandemic by providing assistance and support to Pakistan and other countries.

Turkey has extended medical assistance to over 150 countries during the pandemic to fight the deadly coronavirus.

Cavusoglu assured that Turkey will continue to support Pakistan at international fora, said the statement.

During the meeting, the Turkish top diplomat appreciated Pakistan’s support for Azerbaijan on Nagorno-Karabakh.

“Both sides underlined the need to work closely on joint initiatives to combat Islamophobia, hate speech, and other manifestations of intolerance towards Islam,” the statement added.

Earlier today, President Alvi conferred the award of Hilal-e-Pakistan, Pakistan’s second-highest civilian award, on Cavusoglu in recognition of his services for the promotion of international peace and security as well as Pak-Turkey relations.​​​​​​​