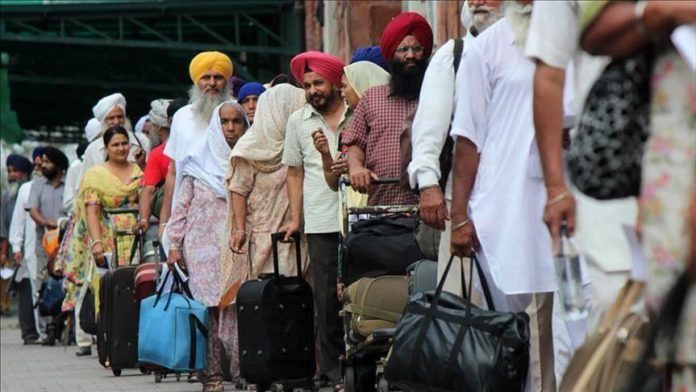 Pakistan on Monday reopened Kartarpur crossing for Sikh pilgrims from neighboring India after a months-long closure, the Foreign Ministry said.

The crossing, which was temporarily closed in March due to the COVID-19 pandemic, has been reopened on the eve of the death anniversary of 18th century Sikh King, Maharaja Ranjeet Singh, who ruled Punjab, which is currently divided between India, and Pakistan.

The first batch of Sikh pilgrims arrived in Pakistan via Kartarpur border to attend the ceremonies in connection with the death anniversary of Maharaja Ranjeet Singh.

Prime Minister Imran Khan inaugurated the Kartarpur Corridor in November last year on the occasion of the 550th Birth Anniversary of the founder of Sikh religion, Baba Guru Nanak Devji.

Baba Guru Nanak had spent the last 18 years of his life in Kartarpur.

“The Kartarpur Corridor is a true symbol of peace and religious harmony. This landmark initiative by the government of Pakistan has been immensely appreciated by the Sikh community all over the world including India,” said a statement from the Foreign Ministry.

“As the religious places are gradually opening up around the world, Pakistan has also made necessary arrangements to reopen Kartarpur Sahib Corridor for Sikh pilgrims,” the statement added.

Kartarpur Sahib gurdwara situated in Narowal district– some 115 kilometers (71 miles) from the provincial capital Lahore — is one of the most revered places for the Sikh community as Baba Guru Nanak spent last 18 years of his life there.

The distance between Kartarpur and the town of Gurdaspur in India is merely 3 km (2 mi). But the closure of this crossing meant that Sikh pilgrims from India had to travel, hundreds of kilometers to cross the border at Wagah, near Amritsar and then travel to Lahore, to reach Kartarpur.

Pakistan’s northeastern Punjab province is home to five most important pilgrimage sites for Sikhs, which include the birthplace of Baba Guru Nanak, who was born in 1469 in Nankana Sahib district, and Gurdwara (monastery) Punja sahib in Hasan Abdal town, where the handprint of Guru Nanak is believed to be imprinted on a boulder at the monastery.

Also, Pakistan is home to several other holy Sikh sites, which attract a large number of community members from all around the world.

The number of Sikhs in Pakistan is estimated between 30,000 and 40,000 out of some 210 million population of this South Asian Muslim country.