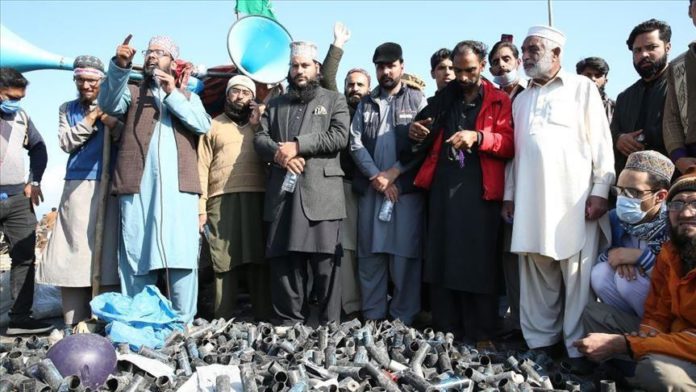 Security forces have sealed off Pakistan’s capital Islamabad to contain thousands of protesters gathered outside the city to protest against the republication of caricatures in France insulting Prophet Muhammad.

According to the eyewitnesses, around 10,000 supporters of a religious group, Tehreek-e-Labbaik Pakistan (TLP), on Monday staged a sit-in outside the capital, demanding expulsion of French ambassador from Pakistan.

Using barbed wires and containers, security forces blocked all major thoroughfares leading to the capital as the protesters planned to march towards the French embassy.

There were reports of clashes between the protesters and the security forces, though the local media blacked out the event.

Videos circulating on social media showed protesters pelting stones on the police, who in return hurled teargas shells and used water cannons to disperse them.

The TLP, led by a firebrand cleric, Allama Khadim Rizvi, shot to fame in 2017 when its supporters staged a long march on the capital against reported legislation aimed at changing the status of Ahmediya sect, which has been declared non-Muslim in the country’s Constitution.

Pakistan army’s media wing issued a traffic advisory for people to use alternative routes as closure of roads caused hardships to the commuters.

Authorities switched off mobile phone services in and around the capital on Sunday, which was partially restored on Monday.

“Intermittent clashes are still continuing as security forces are trying to hold off the charged protesters using teargas and water cannons,” he added.

Last month, French President Macron attacked Islam and the Muslim community, accusing Muslims of “separatism”. He described Islam as “a religion in crisis all over the world.”

This coincided with a provocative move by Charlie Hebdo, a left-wing French satirical magazine infamous for publishing anti-Islamic caricatures which have drawn widespread anger across the Muslim world.

The caricatures were first published in 2006 by Danish newspaper Jyllands-Posten, sparking a wave of protests.