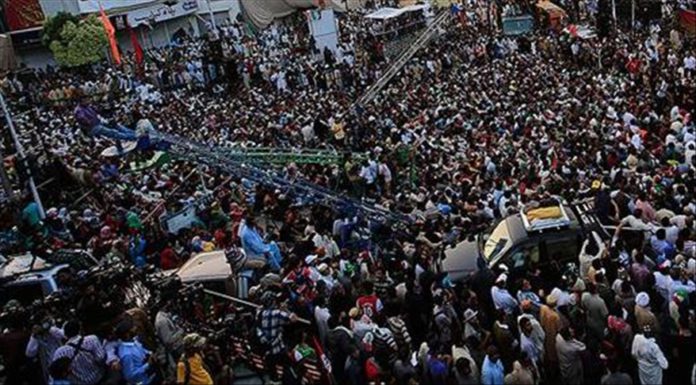 Tens of thousands of opposition supporters rallied in Pakistan’s northeastern city of Lahore on Sunday, despite a government ban on public gatherings due to coronavirus.

The rally held at the historic Minar-e Pakistan monument was part of an ongoing campaign by an 11-party opposition alliance, the Pakistan Democratic Movement, to oust the government of Prime Minister Imran Khan. They accuse him of coming into power through a rigged election two years ago.

Khan’s government has also been under pressure over his handling of the economy characterized by rising inflation and energy shortages.

“You [Imran Khan] will have to go,” Maryam Nawaz, the daughter and political heir of the former three-time premier Nawaz Sharif told the charged crowd, accusing the prime minister of making the lives of Pakistanis miserable.

She urged the participants to wear masks to contain coronavirus. “I value and care for your life,” she said, adding that it was important to attend public meetings.

Sharif spoke via video link. He was sacked by the Supreme Court in 2017, and left for London last November for medical treatment.

They urged the masses to continue to struggle until the government is sent packing, asked the authorities to stop making contacts for reconciliation, and called for answers for the government’s failures.

The joint platform has announced en masse resignations, and a long march toward the capital Islamabad in the next “decisive” phase of the nationwide agitation in January. The next general elections are scheduled for 2023.