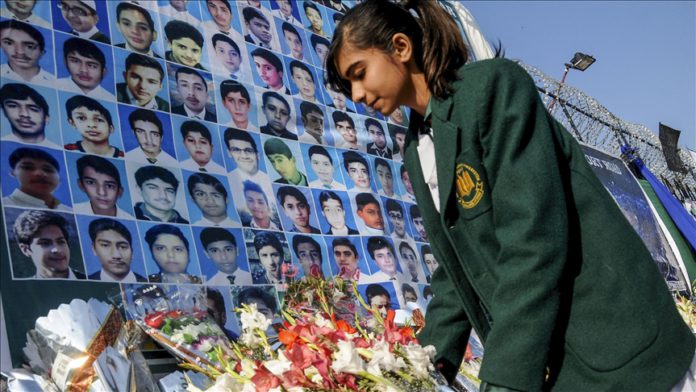 Pakistan on Wednesday observed the sixth anniversary of a deadly attack on an army-run school in northwestern Peshawar city, which claimed lives of nearly 150 people, mostly schoolchildren.

The main observance was held at Peshawar’s Army Public School (APS), which was attended by parents of victims, top provincial government and Pakistan army officials.

Prime Minister Imran Khan also attended another gathering in Peshawar, where he offered special prayers for the victims of the massacre.

“The Pakistani nation together defeated terrorism and today peace has returned to Pakistan,” Khan said while addressing the gathering.

Earlier in a short statement on Twitter, Khan said “Today, six years ago, the nation was shocked & grieved by the extreme act of terrorism against children & teachers of APS; & the nation came together with a resolve to take on those responsible. We remain determined & are moving forward in fulfilling this commitment to the nation”.

Yesterday, dozens of family members of the children marched and gathered at the memorial of martyrs located outside the Public Archives Library.

Carrying banners and portraits of their children killed in the massacre, the family members marched from the city’s downtown to the Army Public School, where they held a candlelight vigil.

Meanwhile, President Arif Alvi said the incident six years ago brought tears in the eyes of the nation.

“I remember that I too could not hold them [tears] back at the Islamabad Press Club. These flowers laid their lives & brought focus of the nation to suppress terrorism with all its might. I thank them,” Alvi said on Twitter.

On Dec. 16, 2014, six Taliban terrorists stormed the school and killed nearly 150 people, including more than 130 schoolchildren.

The Tehrik-e-Taliban Pakistan Khalifa Mansoor group had claimed responsibility for the attack. Mansoor was later killed in a US drone attack in eastern Afghanistan in Oct. 2017.

Pakistan lifted a six-year moratorium on the death penalty after the massacre.

According to Pakistan army, all six militants, who were involved in the attack have been executed.

The military courts, established soon after the attack, awarded death sentences to 310 militants and 56 of them have been executed so far.