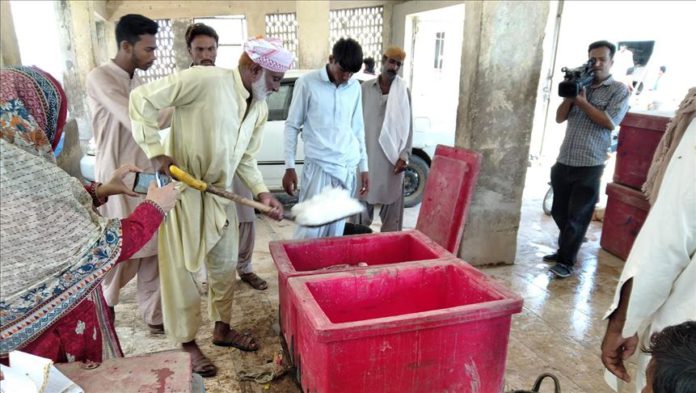 A recent far-beyond-normal monsoon spell that wreaked havoc across Pakistan has given a fresh lease on life to the country’s largest freshwater lake, putting smiles on the faces of thousands of people who have depended on it for years.

Record-breaking rains that destroyed communication infrastructure and crops across the country but mainly in the south and northwest have produced enough fresh water to replace the toxic waters of Manchar Lake.

Located west of the mighty Indus River in the southern districts of Dadu and Jamshoro and spreading over 250 square kilometers (96.5 square miles), Manchar is also one of Asia’s largest freshwater lakes. With an average depth between 2.5 to 3.75 meters, the lake can expand to 500 square kilometers during the peak monsoon season.

However, it has become a dumping ground for industrial waste generated from upper parts of southern Sindh province and a few areas of southwestern Balochistan province, putting the lives of those who depend on the waters at risk.

A gradual buildup of pollutants that began from 1992 after the construction of canals and artificial drains has contaminated the lake and destroyed fish stocks, forcing the local fishing communities to either migrate or seek other forms of employment.

The canals were aimed at tackling salinity and water logging which was affecting the large tracts of arable land in the adjoining areas, but the misconceived project actually destroyed the lake.

According to Nasir Panhwar, a Hyderabad-based environmentalist, wastewater effluents did wash into the lake even before the construction of the canal known as the Right Bank Outfall Drain (RBOD), but they were “manageable” and did not pollute the water to an extent where it would destroy the lake ecologically.

Manchar Lake gets fresh water from three sources: fresh rainwater from 18 torrents in the Kirthar hills, the Indus River and the RBOD.

“Less rains, a gradual reduction of water from the Indus River due to the construction of barrages and dams and the industrial waste washed into the lake through RBOD have combined destroyed the ecology of Manchar Lake,” he said.

The lake, filled with glistening light blue waters nowadays, gives off a dazzling look. The otherwise saline and murky waters have been replaced with fresh rainwater, relieving the local communities in many ways.

“I am seeing this new look after years, which is no doubt eye-soothing,” Rahib Ali, a local fisherman sitting on the eastern bank of the lake, told Anadolu Agency.

It was a decade ago — in 2010 — when super floods which inundated a fifth of the land in Pakistan had filled the lake.

“But more than the eye-soothing view, it will meet our several physical and economic needs,” he added.

The first and foremost requirement of the area’s people is potable water, for which they had to travel miles. One could literally not even gargle with the lake water until a couple of weeks ago.

“We had to travel to the nearest bazaar, which is three kilometers (1.8 miles) away, to buy potable water. We could use that water only for drinking purposes, not for washing or cooking, as we could not afford to travel and buy that much water daily,” added Ali, 54, who was wearing a blue shalwar kameez, or loose trouser and shirt.

Many could not even afford to buy potable water and would use the toxic lake water for drinking, bathing and washing, which caused eye and skin infections and waterborne diseases, mainly diarrhea and gastroenteritis.

“But now, our men and women do not have to travel to procure water. We have ample water now, at least for the next several months,” Ali said with a big smile.

“All we have to do is boil the water before drinking it, as it still has remnants of toxic effluents,” he maintained, while acknowledging that most of the communities do not do that.

Dozens of women were spotted washing clothes at different sites along the lake bank.

“We can easily wash clothes now. Before [the rains], the [lake] water was as saline as we had to apply an entire piece of soap to turn it into foam to wash clothes,” Sohni, who goes by only one name, told Anadolu Agency.

A group of children were enjoying dips a few meters away from her in shallow waters.

“It’s so clean and sweet. It’s the first time I have seen water this clear in my lifetime,” said Mohammad Farhan, 13, as his mates splashed water on him.

Decades-long deterioration of the lake’s ecosystem and fast dwindling fish stocks have led to a gradual exodus of local fishing communities, particularly in the last decade.

According to the 1988 national census, the population of the fishing community on the banks of Manchar Lake was 200,000 which according to Sher Mohammad, a local community leader, has fallen to only 35,000.

Thousands of fishermen have either moved to the ‘fishing towns’ of Karachi, Gwadar and Pasni and even districts near barrages to make a living or became laborers in recent decades.

Once filled with 35 species of fish, only six to seven are currently found in Manchar Lake, mainly fish locally known as ‘dhayya’ which are not commercially profitable and only used to make chicken feed, said Mohammad.

Mohammad Moosa, an old fisherman, was shifting a cache of dhayya fish into a cold storage box at a fish market located on the bank of Machar Lake before transporting it to a feed factory in the nearby town of Sehwan some 20 kilometers (12.4 miles) away.

He is one of the fishermen who have neither migrated nor changed their occupation despite the distressing conditions.

“It’s not that the [fish] business is completely over. No doubt, it has been damaged to a massive level. But still we are earning our livelihood from this lake,” Moosa told Anadolu Agency as he placed a layer of ice on the fish to preserve them.

He hopes the replacement of the toxic water by fresh rainwater will rejuvenate the lake’s ruined ecosystem.

“Fresh water means more food [including different kinds of grass and herbs], and more food means more fish,” Moosa said, adding it would take some time to put things on track as the lake’s ecosystem had long been deteriorated.

“Fish will not come automatically just with the replacement of water, which had long been due. But it will have to complete a full cycle. For example, the fresh water will restore the food circle, which will subsequently lead to improved fish stocks,” he noted.

Tahir Rasheed, director of Worldwide Fund for Nature-Pakistan (WWF-Pakistan), observed that the recent rains would certainly contribute to the ecological health of Manchar Lake.

Panhwar, the Hyderabad-based expert, warned however that the relief provided by abnormal rains could be temporary.

“This relief is only because of massive rains. It’s not a permanent solution. If rains remain regular and heavy at similar levels in the coming years, only then will it rejuvenate the lake’s marine life and depleting fish stocks,” he maintained.

The permanent solution to this problem, he went on to argue, is change in the faulty design of the RBOD.

Realizing the damage caused by the drain’s faulty design, the government had decided to build a new canal to carry effluents directly into the Arabian Sea in 2002, but due to bureaucratic labyrinths and other unspecified technical and financial reasons, the project has experienced lengthy delays and cost overruns.

“If the government does not act swiftly for a permanent solution, we may stand at the old position within the next six to eight months,” he cautioned, explaining that the industrial waste will continue to wash into the lake from the RBOD and refill it with toxic water.

‘Truth will be out': China after US rebuke on COVID-19