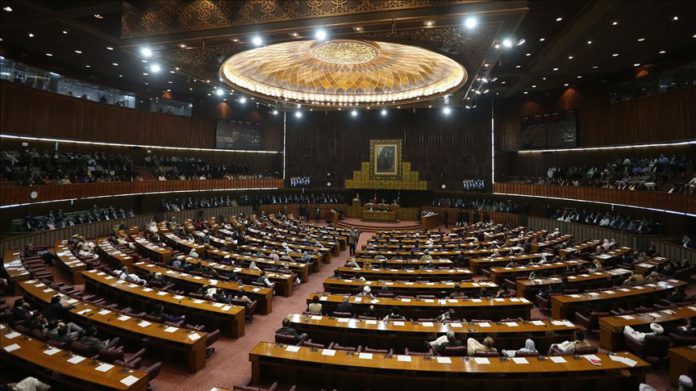 The resolution, jointly moved by both the government and opposition benches, commended the ailing leader’s “unwavering commitment, dedication, perseverance and leadership,” and acknowledged his role in “exposing Indian atrocities, suppressive measures and human rights violations in Indian occupied Kashmir.”

Kashmir, a disputed territory, is held by India and Pakistan in parts but claimed by both in full. A small sliver of the region is also controlled by China.

On Aug. 5, 2019, New Delhi revoked Article 370 and other related provisions from its Constitution, scrapping the country’s only Muslim-majority state with its autonomy.

It also locked the region down, detained political leaders, imposed a curfew, and enforced a communications blackout.

It recommended the government to confer upon him Nishan-e-Pakistan, the country’s highest civil award, for his struggle to settle the dispute in the light of UN resolutions, which give Kashmiris the right to self-determination.

“Include the life and struggle of Syed Ali Shah Gilani in the educational curriculum at federal and provincial level and mobilize world conscience to help Gilani get best available treatment at a place of his choice,” the resolution read.

The motion came just hours after Geelani’s announcement to observe a strike on Aug. 5 and Aug. 15 in Indian administered Jammu and Kashmir.

In a statement, he termed India’s Aug. 5 move as “one of the darkest chapters,” saying the day should be observed as an “awareness day” and the Kashmiri diaspora around the world should protest outside Indian embassies.

Last month, he stepped down from the leadership of All Parties Hurriyat Conference, a conglomerate of several pro-freedom parties in the Himalayan region.