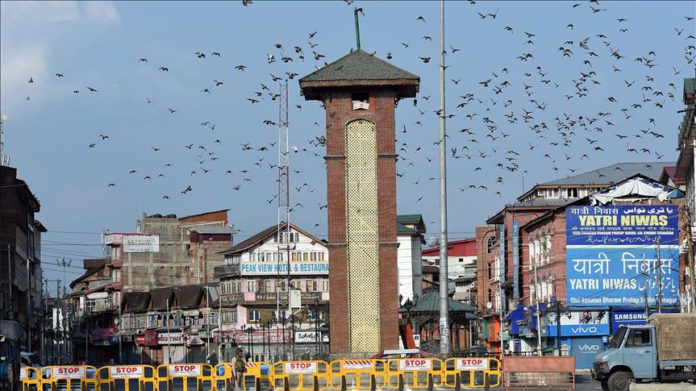 Pakistan on Friday urged the international community to prosecute Indian civil and military personnel for “the worst form of state terrorism and serious crimes against humanity” in Indian-administered Jammu and Kashmir.

“Since 1990, India’s occupation army has martyred over 100,000 Kashmiris, widowed 22,000 women, orphaned 108,000 children and raped more than 11,000 women,” Foreign Minister Shah Mahmood Qureshi said in a statement on the International Day of Remembrance and Tribute to the Victims of Terrorism, marked globally on Aug. 21.

He accused New Delhi of having “intensified” its “state terrorism” after launching a “military siege” on Aug. 5 last year, the day India revoked the disputed Himalayan region’s special autonomous status and split it into two federally administered territories.

Qureshi condemned India for the “imprisonment of political leaders; the abduction and torture of 13,000 Kashmiri youth; brutal force against peaceful protestors; collective punishments and extra-judicial killings.”

The Muslim-majority region – held by India and Pakistan in parts but claimed by both in full – has been a major bone of contention between the nuclear rivals for decades.

“The international community should seek to prosecute the Indian civil and military personnel involved in the state terrorism and serious crimes against humanity,” he said.

Qureshi reaffirmed Islamabad’s commitment to work with the international community to “eliminate the menace of terrorism.”

Over the past two decades, he said, more than 70,000 lives have been lost in terrorist attacks in Pakistan and the economic cost to the country has been over $120 billion.

“Despite these losses, our resolve to fight terrorism remains unwavering. Pakistan stands with the international community to eliminate the menace of terrorism. We reiterate our commitment to take joint actions to extend all support to those who have been the victims of terrorism,” the minister concluded.