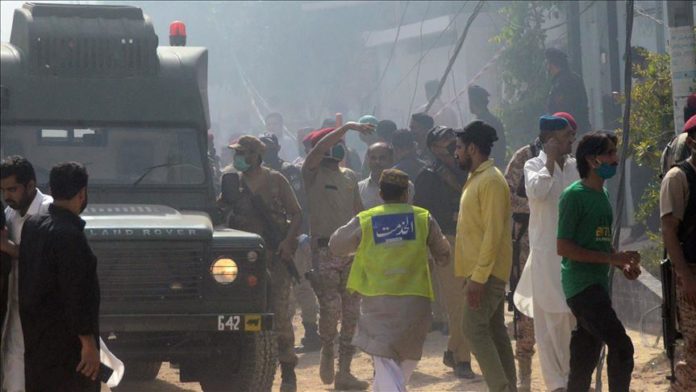 The pilot and air traffic control (ATC) were responsible for the plane crash that killed 98 people in Pakistan’s southern port city of Karachi last month, according to an investigation report unveiled on Wednesday.

Presenting the interim report in parliament, Aviation Minister Ghulam Sarwar Khan said a “fair” inquiry by the investigation board suggested the air disaster was caused by human error.

The final report will take a year to complete, the minister said.

“There was no technical fault in the plane [Airbus A320]. It was completely fit for flying. The pilot and co-pilot, who were both medically fit and experienced, did not mention any technical fault to the ATC throughout the flight,” Khan said.

On May 22, a Pakistan International Airlines flight traveling from the northeastern city of Lahore crashed into a residential area near Jinnah International Airport in Karachi with 99 passengers and crew on board.

According to the report, the minister said, the plane was at a height of 7,220 feet when it was 10 nautical miles away from the airport, as against the required altitude of 2,500 feet.

He said the ATC repeatedly pointed out the height issue to the pilot but “he did not heed the warnings.”

“Unfortunately, the pilot was overconfident and not focused. He ignored the ATC’s warnings several times until the final approach,” Khan told lawmakers in the National Assembly, the lower house of Pakistan’s parliament.

“According to the cockpit voice recorder, the pilots and the crew members remained engaged in conversation about the coronavirus throughout the flight. It seems as if the coronavirus got on their nerves.”

The engines of the ill-fated plane, he said, caught fire after the first failed landing attempt, but the ATC did not point that out to the pilot before he took off for the second landing.

“This is a free, fair, and transparent inquiry. I assure you all that very strict action is being taken against those found responsible for the crash,” he added.

There have been over a dozen plane crashes on Pakistani soil since the country came into existence in 1947, with the deadliest being the 2010 crash of an Airbus A321, operated by private airline Airblue, outside the capital Islamabad, which killed all 152 people on board.