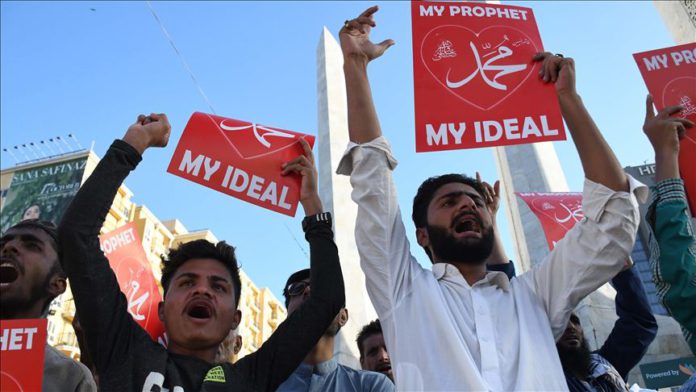 Hundreds gathered near the French Consulate in Pakistan’s largest city Karachi on Wednesday to protest the rising wave of Islamophobia in the European nation.

They carried banners and placards with messages such as “Down with Charlie Hebdo,” “Down with France,” and “Sacrilege of Prophet Muhammed is unacceptable” as they marched towards the French consulate in Karachi’s upscale Clifton town.

In recent weeks, Macron has attacked Islam and the Muslim community, accusing Muslims in France of “separatism” and describing Islam as “a religion in crisis all over the world.”

Following talks between the protesters and local administration, JI lawmaker Syed Abdul Rasheed was allowed to hand over a letter with demands to consulate officials.

The document conveyed Pakistanis’ anger over the recent move to project the blasphemous caricatures of Prophet Muhammad on French government buildings.

That happened on Oct. 21 as part of a tribute to Samuel Paty, a teacher who was beheaded in a Paris suburb earlier this month after showing the cartoons in class during a discussion on freedom of speech.

“We cannot accept attacks on Islam and Prophet Muhammad under the guise of freedom of speech. These have nothing to do with freedom of speech,” Hafiz Naeem-ur-Rehman, JI’s Karachi chief, said at the rally.

“This is just a smear campaign that is part of the rising tide of Islamophobia in the Western world, mainly Europe.”

He urged the Organization of Islamic Cooperation (OIC) and all Muslim world leaders to take a “joint and strong” stand against France and other countries guilty of such acts.

Otherwise, the Muslim world will never forgive you, he warned.

Rehman also demanded the expulsion of the French ambassador to Pakistan.