TurkishPress
Home News Pakistan has another day with over 6,000 virus cases 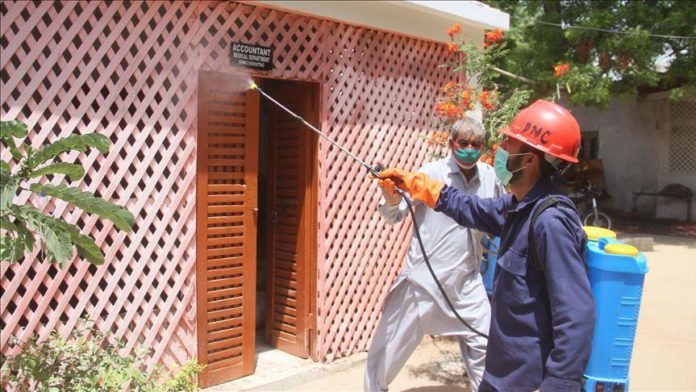 Amid a record-breaking surge in the coronavirus pandemic, Pakistan on Saturday reported 6,472 new virus cases in the previous 24 hours, the highest single-day tally ever, the Health Ministry said.

With another single-day tally of over 6,000 – the second in the last two days – the country’s total coronavirus cases have reached 132,399, of which nearly 50,000 were reported this month alone.

Another 88 patients lost their lives due to COVID-19 across the country, bringing the death toll from the deadly virus to 2,551, while 40,247 patients have successfully recovered and been discharged from hospitals, according to the Health Ministry.

The report showed that death ratio in confirmed cases also rose to 2%, from 1.7% earlier, while recoveries also climbed from 20% to 32%.

The data show that most deaths occurred in patients between the age of 60 and 69, at a rate of nearly 30%.
Health experts see the ever-rising caseload as a result of the lifting of a prolonged lockdown late last month, warning that the country’s already weak healthcare system could crash soon if the tally continues to surge at the current pace.

On May 9, the country’s total confirmed cases were 29,465, when Prime Minister Imran Khan announced an easing of the lockdown in phases, but just one month later it had reached nearly 126,000.

The World Health Organization has declared Pakistan the second-riskiest country after Afghanistan in terms of vulnerability to the pandemic.

In a letter to the government on Tuesday, the UN health agency suggested a two-week strict lockdown to contain the surging outbreak.

Responding to the suggestion, Zafar Mirza, the prime minister’s health advisor, said the country took the decisions in the best interests of the people.

Even Khan has ruled out a strict shutdown, saying a “smart lockdown” is the only solution for developing economies.

February 8, 2021
We use cookies to ensure that we give you the best experience on our website. If you continue to use this site we will assume that you are happy with it.Ok