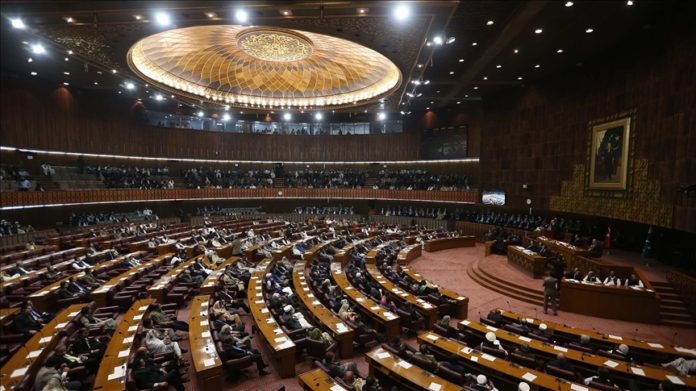 Pakistan’s president on Saturday approved an ordinance to hold the forthcoming Senate polls through open vote.

The ordinance, opposed by the opposition, has come before a Supreme Court judgment, where a case on the matter is pending.

The judges, though, had urged the government to decide the issue through Parliament.

Information Minister Shibli Faraz posted a photo of the ordinance on Twitter, which says that since both the upper and lower houses are not in session, the president “is satisfied that circumstances exist which render it [the ordinance] necessary to take immediate action.”

Under Pakistani law, all polls, except for the election of the prime minister and chief ministers of provinces, must be held through secret ballot.

The move, according to premier Imran Khan, is aimed at containing the “sale of votes” in Senate elections, which has long been a problem in the country.

Over 1,100 members of the lower house — the National Assembly — and the four provincial assemblies will elect 52 new members to the 104-seat Senate next month for six-year terms.

All the provinces have an equal number of seats in the upper house, which is currently dominated by the opposition, hampering legislation on several issues since the ruling Pakistan Tehreek-e-Insaf (PTI) came to power in 2018.

Premier Khan’s PTI is expected to attain the majority after the coming elections.

The opposition, for its part, contends that the open voting in the Senate polls is only possible through a constitutional amendment, for which the government does not have the required numbers in both houses.

On Thursday, the opposition foiled a move by the Treasury in the National Assembly to hold Senate polls through “show of hands,” forcing the government to opt for introducing the presidential ordinance.

‘Russian bounties may have led to deaths of US troops’