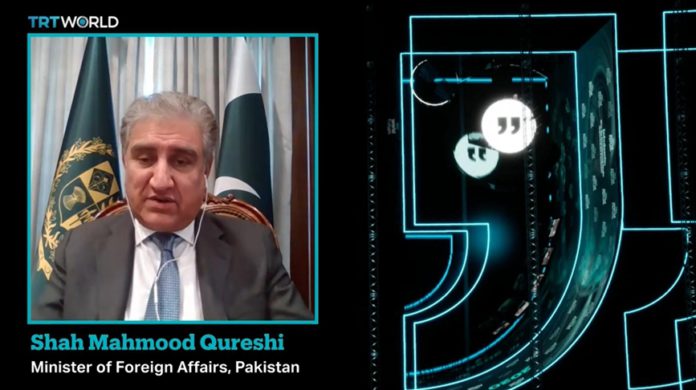 Some countries, including India, defied international calls for peace and cooperation even during the coronavirus pandemic, the Pakistani foreign minister said on Wednesday.

Speaking at a session on the last day of the TRT World Forum 2020 via video link, Shah Mehmood Qureshi said India disregarded the UN secretary general’s call for a “global cease-fire,” thus continuing its violations across the Line of Control, the de facto border that divides the disputed Kashmir region between the nuclear-armed rivals.

“When we needed the WHO the most, some of us were withdrawing from WHO and not cooperating… when the secretary general of the United Nations calls for an immediate cease-fire in different conflict zones of the world, and deal with this pandemic… nobody pays heed to his call. That was another challenge,” he said.

“In our region, South Asia… we saw a new sort of intensification of cease-fire violations… if we compare the violations in 2019 and 2020 during the pandemic, they went the opposite way,” he said.

The foreign minister called for conflict resolution in South Asia before it is too late.

“Please do not ignore South Asia. There are two nuclear states, confronting each other, and if you do not pay heed, if you not pay attention to this simmering problem, a dispute, then there could be a problem and the world will get sucked in,” he said.

Qureshi censured New Delhi for “linking the spread of coronavirus with Indian Muslims,” and introducing discriminatory policies such as the Citizens Amendment Act, which grants citizenship to non-Muslims from Muslim-majority Afghanistan, Bangladesh and Pakistan, and undermines India’s secular Constitution.

Speaking on the situation in Jammu and Kashmir, the foreign minister said India increased its stranglehold of the Himalayan valley amid the virus outbreak.

“India imposed new restrictions and communication blockade over there, violated fundamental rights and brought new measures to bring demographic changes in the region, which are against international law,” he said.

Qureshi also discussed rising Islamophobia and xenophobia, and violence against migrants, and urged for more cooperation to overcome the crisis.

US professor who pretended to be Black quits job