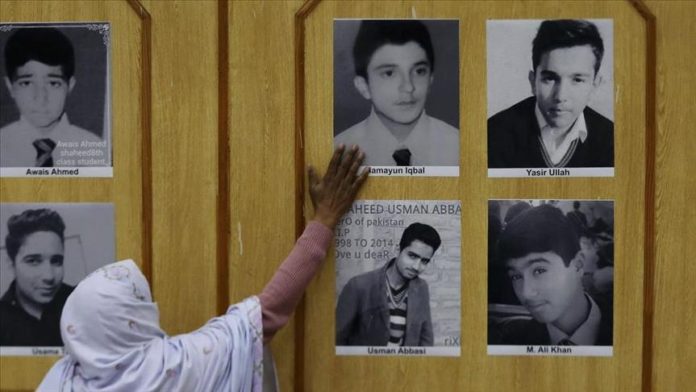 Dozens of family members of the children killed in 2014 terrorist attack on an army-run school in Pakistan marched on Tuesday on the eve of the sixth anniversary of the tragic incident.

On Dec.16, 2014, over 140 people, mostly children were killed in a gun-and-bomb attack on the Army Public School in the northeastern Peshawar city by terrorists belonging to the banned Tehreek-e-Taliban Pakistan (TTP).

Carrying banners and portraits of their children killed in the massacre, the parents and family members marched from the city’s downtown to the Army Public School, where they held a candlelight vigil, showed footage aired on local broadcaster Geo News.

Earlier, the families gathered at the “memorial of martyrs” located outside the Public Archives Library to attend special prayers for the deceased children.

“Martyrs of Army Public School – we haven’t forgotten you,” read a banner carried by the participants.

Touching scenes were witnessed during the rally as several mothers burst into tears while remembering their loved ones.

The Peshawar massacre ranked as the worst massacre in the country’s 73-year history. The grim memories of the brutal carnage still haunts Pakistanis.

The deadly incident also prompted Pakistan to lift a six-year de facto ban on capital punishment on the very next day.