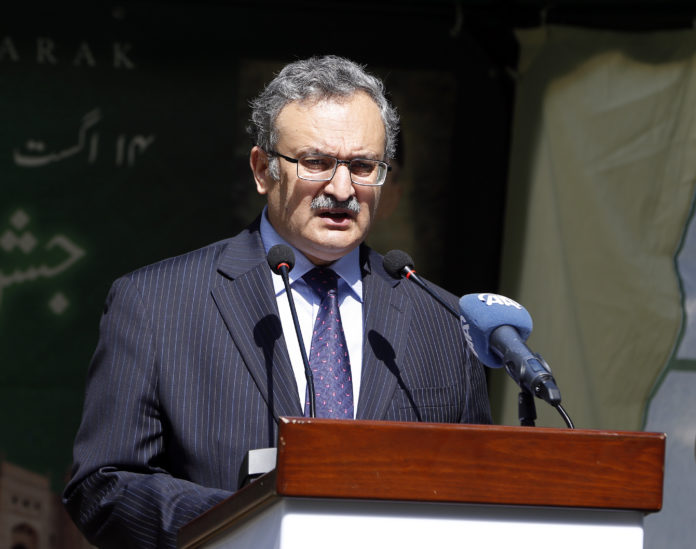 The Pakistani Embassy in Ankara on Friday marked the country’s 74th Independence Day.

Amid participation of Turkish and Pakistani community members, the country’s ambassador to Turkey unfurled the green flag while Pakistan’s national anthem was played with a life-size billboard of the country’s founder – Muhammad Ali Jinnah – hanging in the backdrop.

“This is a day of introspection,” said Muhammad Syrus Sajjad Qazi, the Pakistani ambassador, in his address to participants where Pakistani community members were seen wearing colorful traditional dresses of Shalwar-Kameez.
“We must see how and what we did to make our country stronger in the past one year,” he added, greeting the community on its Independence Day.
Pakistan achieved its independence on Aug. 14, 1947 after centuries of British rule.

Reading out messages from the president and prime minister of Pakistan, the embassy’s deputy chief of mission urged the community members “not to forget people of Indian illegally occupied Jammu and Kashmir [IIOJK]”.

“May Almighty Allah bless and crown our efforts with success to rebuild the country in consonance with the vision of its founding fathers and also bestow freedom upon our Kashmiri brethren in IIOJK to complete the agenda of the partition,” read the message of Prime Minister Imran Khan on the occasion.

“The day is an occasion to pay tribute to all those sons of the soil who laid their lives while defending and protecting territorial as well as ideological frontiers of the motherland. This day is an occasion to pause and to reflect as to how far we have been able to achieve those ideals that led to creation of an independent state. During past seven decades of our journey, we have been confronted with various challenges,” Khan said.

Melda, a Turkish student majoring in Urdu from Ankara University, said she had a love affair with Pakistan’s national language.

“There is intense love between people of Turkey and Pakistan,” said Melda.

As part of Independence Day commemoration, the Pakistan embassy is holding a week-long photo exhibition “Colors of Pakistan – Seen Through the Eyes of Turks” from Aug. 13-20 in Kizilay.

Somali graduates of Turkish scholarship program give back to their country