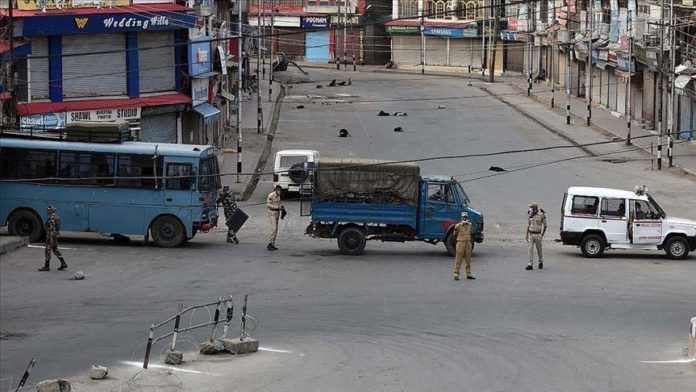 Pakistan on Monday expressed “deep concern” over the continued incarceration and deteriorating health conditions of pro-freedom Kashmiri leaders, who have been prisoned following India’s scrapping of the semi-autonomous status of the disputed Jammu and Kashmir region in August last year.

“These Kashmiri leaders have been illegally arrested over malicious, false, and fabricated charges by the Indian government through invoking draconian laws promulgated in Indian Illegally Occupied Jammu & Kashmir (IIOJK),” said a statement from Pakistan’s Foreign Ministry.

These leaders include Asiya Andrabi, the founding leader of Kashmiri organization Dukhtaran-i-Millat or Daughters of Nation; Shabbir Ahmed Shah, the leader and founder of the Jammu and Kashmir Democratic Freedom Party, and prominent leaders such as Yasin Malik, Masarat Alam Bhat, Mohammad Ashraf Sehraie, and others, who have been languishing under squalid conditions in the midst of the COVID-19 pandemic in New Delhi’s infamous Tihar jail and others.

Many other senior Kashmiri leaders, including Syed Ali Shah Geelani and Mirwaiz Umar Farooq, are also under house arrest.

“Imprisonment and torturing of Kashmiri leaders on the basis of their political ideology and struggle against illegal Indian occupation is a true reflection of the extremist mindset of the RSS-BJP regime which has no respect for the human rights of the Kashmiri people,” the statement added.

Islamabad urged the international community, particularly the UN, and human rights and humanitarian organizations to take notice of the Indian government’s “inhuman treatment of the Kashmiri leaders and raise its voice for their immediate release from illegal Indian detention.”

Farooq Ahmad Bhat, the uncle of Hurriyat leader Masarat Alan Bhat, said that he “did not expect the Indian government to keep us informed about Masarat’s health.”

“I haven’t visited him since corona pandemic erupted. I am an old man. But I have learnt he is not well. Even to inquire about his health involves visiting the jail that is hundreds of miles away,” Ahmad Bhat told Anadolu Agency from the Indian-administered Jammu and Kashmir.

Mujahid Sehraie, the son of Hurriyat leader Mohammad Ashraf Sehraie, also claimed that the prison authorities did not allow him to meet his father.

“My father was arrested in July. I tried to meet him then but jail authorities didn’t allow us, citing COVID-19. He is allowed to give a phone call to home once a month and that too for five minutes,” he told Anadolu Agency.

His father called on Dec. 8 and told them that he had a fever.

“He is 76 and suffers from multiple ailments but he has not been taken for specialized check-ups. You can see we have no idea what he is going through because our communication with him has been curtailed,” he added.

Long-fraught relations between the two South Asian nuclear rivals further flared up after India scrapped the special provisions of the state of Jammu and Kashmir in August 2019.

*Hilal Mir contributed to this story from the Indian-administered Jammu and Kashmir.