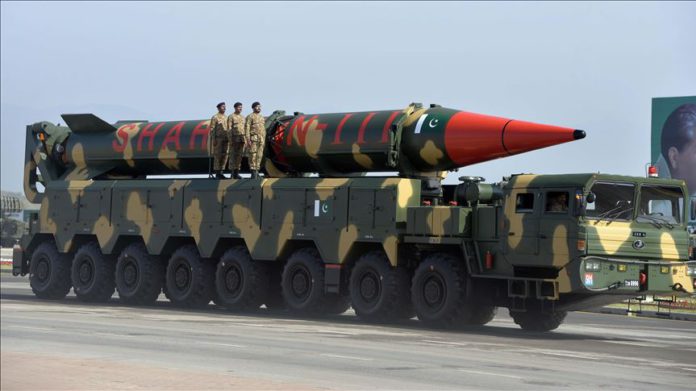 Pakistan on Thursday commemorated the 22nd anniversary of its six nuclear tests, which it had conducted in the remote Chaghi district of southwestern Balochistan province on May 28, 1998.

With no grand celebrations to mark the event — commonly known as Youm-e-Takbeer — due to COVID-19 restrictions, several seminars and conferences were held by the government, and the opposition parties in different parts of the country.

Islamabad’s move had come only two weeks after New Delhi conducted five nuclear tests during a period of May 11-13, 1998 in Pokhran range of Rajasthan state, which borders Pakistan’s southern Sindh province, triggering a new arms race in the already tense region.

“Every year, May 28 serves as an earnest reminder of Pakistan’s desire for peace as well as the nation’s unswerving resolve to defend its territorial integrity, sovereignty and independence,” Foreign Minister Shah Mehmood Qureshi said at a seminar in the capital.

Unfortunately, he said, the current security situation in South Asia underscored the compulsion for Pakistan to remain ever vigilant of the more traditional threat to national security emanating from the “hegemonisitic ambitions” of a larger neighbor under the rule of “an ultra-nationalist and revisionist regime.”

“The recent escalation along the Line of Control [de facto border that divides disputed Kashmir valley between Pakistan, and India], incessant ceasefire violations and the canard of cross-border infiltration are designed to divert international attention from the gross human rights violations by the Indian Occupation forces in the Indian Occupied Jammu & Kashmir,” he went on to say.

Terming New Delhi’s approach on nuclear issues and threats of dismemberment, “irresponsible”, Qureshi said: “The flawed notion of establishment of a ‘new normal’ and fantasies of ‘punishing Pakistan’ while remaining below the threshold of a nuclear conflict demonstrate irresponsible and dangerous behavior by India”.

“While responding effectively in self-defense and deflating exaggerated notions of military superiority, Pakistan exhibited restraint and responsibility. However, it is not always possible to predict the trajectory of escalation in similar situations and Pakistan should not be expected to one-sidedly carry the burden for maintaining peace,” he warned.

“On May, 28 1998, Pakistan successfully established (a))credible (and) minimum nuclear deterrence, and restored balance of power in the region.”

“Armed Forces salute all those involved from conceptualization to actualization, especially scientists , and engineers who made this possible. Long Live Pakistan,” he said in a twitter post.

Main opposition Pakistan Muslim league (Nawaz) of the three-time premier Nawaz Sharif, who as a premier had ordered the nuclear tests to be carried out, held a ceremony in northeastern Lahore city, to mark the event.

“It was a historic moment in the country’s history. It was a very tough decision as several big powers had pressured Nawaz Sharif not to conduct the tests,” Former premier Shahid Khaqan Abbasi said while addressing the ceremony.

Already heightened tensions between the two countries plummeted to a new low after New Delhi scrapped the longstanding special status of disputed Jammu and Kashmir region last August following an air combat between the two air forces in February 2019.

Since then, the two border forces have been engaged in almost daily clashes at the Line of Control (LoC), a de factor border that splits the scenic Kashmir valley between the two rivals.

Apart from Kashmir, the two countries have been locked in a string of sea-and-land disputes, amid several “successful” missile tests.

India boasts the world’s third-largest army after the US and China, with an active troop strength of over 1.3 million. Pakistan, meanwhile, stands eighth on the list with a 600,000-man army.

India has been the second-largest arms importer in the world over the past five years, with Pakistan ranking 11th, according to Sweden-based Stockholm International Peace Research Institute (SIPRI).

Pakistan and India are among a few select countries with nuclear arsenals. India joined the nuclear club long before Pakistan, in 1974, prompting Islamabad to follow suit. Pakistan silently developed its own nuclear capability in the 1980s, when it was an ally of the US in the first Afghan war against the crumbling Soviet Union.

According to the SIPRI, India currently possesses between 80 and 100 nuclear warheads, while Pakistan holds between 90 and 110.

Meanwhile, a number of international think tanks, which blame China for assisting Pakistan’s nuclear program, believe the size of Islamabad’s nuclear arsenal will cross the 200-mark within the next five years.

US: White House urges loan use for pandemic relief