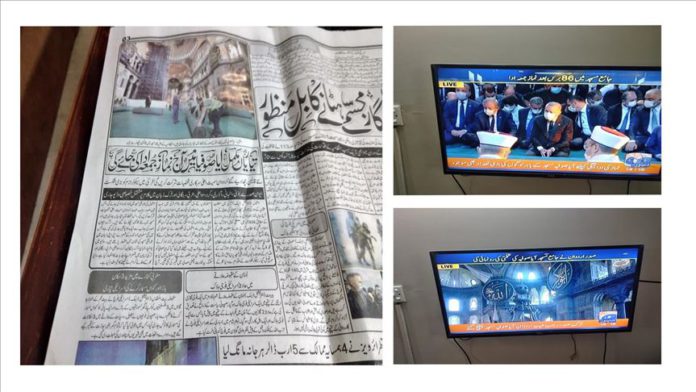 Major media outlets in Pakistan and Bangladesh have unequivocally conveyed the significance of the reopening of Turkey’s iconic Hagia Sophia Mosque for worship for the first time in 86 years with Friday prayers, dubbing it as a “landmark moment.”

Over a dozen top TV channels, including state-run Pakistan Television, cut their routine bulletins, and aired wall-to-wall coverage of the grand event.

They ensured live transmission from different corners of the Mosque, highlighting its historical past, and importance for the Muslims around the world.

“Turkey’s historic Hagia Sophia Mosque reopens after 86 years” was the headline of the country’s largest private broadcaster Geo News bulletin flanked by live scenes from the main prayer hall, and outside.

The broadcaster also highlighted the presence of President Recep Tayyip Erdogan, sitting in the front row, and other political, and religious personalities.

Also, the channel, in a series of tweets, said ” Hundreds of Muslims have gathered to take part in the first prayer at Hagia Sophia since the Istanbul landmark was reconverted to a Mosque.”

“Soul-soothing scenes from Hagia Sophia after 86 years”, was the headline of 24 News, another private broadcaster.

The channel aired a separate package about the mosque’s historical background, and the conquest of Istanbul by Sultan Mehmet II.

“Call for prayer resounds in Hagia Sophia after 86 years”, was the title of the coverage by 92 News, another local TV channel.

State-run Associated Press of Pakistan aired live coverage of the event through its official twitter account, with the title “Jumma prayers at Hagia Sophia, Turkey @ayasofyacamii”.

“First Friday prayer after 86 years at Hagia Sophia today” was the title of a front page story in Daily Jang — Pakistan’s most popular Urdu-language newspaper.

Ummat — another popular Urdu Daily ran a story on last-minute arrangements for the event with a sub-title “President Erdogan, and other dignitaries will attend the event.”

Daily Jasarat, another Urdu Daily published a detailed report about the re-opening ceremony with title ” Preparations finalized-Hagia Sophia is all set to reopen today”.

The reopening of the iconic mosque also remained a top trend on Twitter, Facbook, and other social media platforms, where users shared pictures of Hagia Sophia Mosque, highlighting the significance of the event.

“1000s and 1000s gathering in streets to Ayasofya to attending historic moment of Friday prayers after 86 years,” tweeted Aisha Ghazi, a famous blogger, and filmmaker, with live scenes from Hagia Sophia.

“Istanbul’s streets are filled Today. The zeal, and fervor of Muslims is must-watch on the occasion of Friday prayers at Hagia Sophia after 86 years,” tweeted Saad Maqsood, a local social media activist.

“We have got a tremendous feedback from our visitors for running it,” Tushar Abdullah, head of news of the Somoy TV, told Anadolu Agency.

Abdullah said they are expecting that a record number of visitors enjoyed the live broadcast through their YouTube channel while millions others watched the main broadcast on television.

Meanwhile, a huge number of Bangladeshi people expressed joy over the reopening of the Hagia Sophia Mosque.