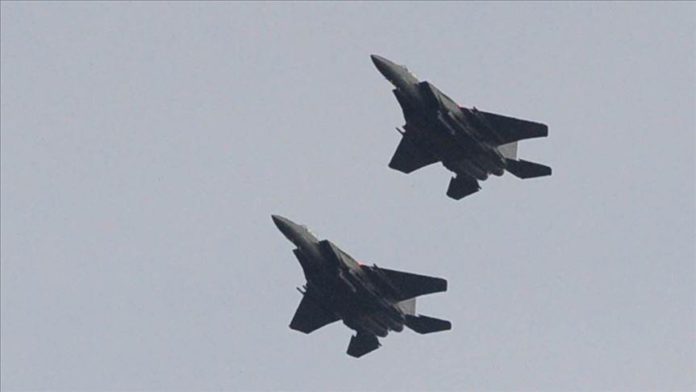 Pakistan Air Force (PAF) on Wednesday formally inducted the JF-17 Thunder Block II dual-seater fighter aircraft into its fleet and also launched the production of Block III of the same aircraft, a significant advance in the country’s air defense arsenal.

According to an official release, a ceremony for the formal induction of 14 JF-17 Thunder Block II, a dual-seat combat fighter aircraft, jointly developed by Islamabad and Beijing, was held at the Pakistan Aeronautical Complex (PAC), the PAF’s manufacturing facility in Kamra, near capital Islamabad.

The ceremony was attended by the country’s Air Chief Marshal Mujahid Anwar Khan and Chinese Ambassador to Pakistan Nong Rong, said the statement released by PAF.

Anwar congratulated the PAC and China National Aero-Technology Import and Export Corporation (CATIC) on the successful completion of the production target in a record time and called the induction of the dual-seat fighter aircraft JF-17 Thunder in the PAF fleet a significant milestone towards self-reliance.

Fourteen aircraft were handed over to the PAF, which will be used for training.

The JF-17 Thunder dual-seater is designed to improve the PAF’s operational and training capabilities, the statement said and added: “It will further enhance the advanced combat training of PAF fighter pilots on this indigenous war fighting machine.”

The production is part of the modernization of Pakistan’s air fleet to compete with its arch-rival, the Indian Air Force, which has more than 2,000 aircrafts compared to the PAF’s current strength of over 900 aircraft and helicopters.

In recent months, India received Rafale fighter jets from France after New Delhi paid €7.8 billion ($9.2 billion) four years ago for the purchase of a total of 36 aircraft from French defense manufacturer Dassault Aviation.

On Wednesday, the Pakistani air chief and the Chinese ambassador also inaugurated the production of the latest Block III of JF-17, multirole fighter aircraft, which is believed to be equivalent to that of Rafael jets.

The PAC in Kamra has so far delivered more than 100 home-made JF-17 Block I and Block II aircraft to the PAF since 2009.

Meanwhile, the Pakistan Navy on Wednesday also held a demonstration of surface-to-air missiles that reached their target successfully.

According to a separate official statement, Chief of the Naval Staff Admiral Amjad Khan Niazi attended the ceremony and witnessed a demonstration of missile fire.

Addressing the ceremony, Niazi said: “Pakistan Navy is fully capable to give a befitting response to any aggression.”

Praising his team, Niazi said the excellent demonstration of firing missiles speaks about the operational capabilities of the Pakistan Navy and war preparations. ​​​​​​​