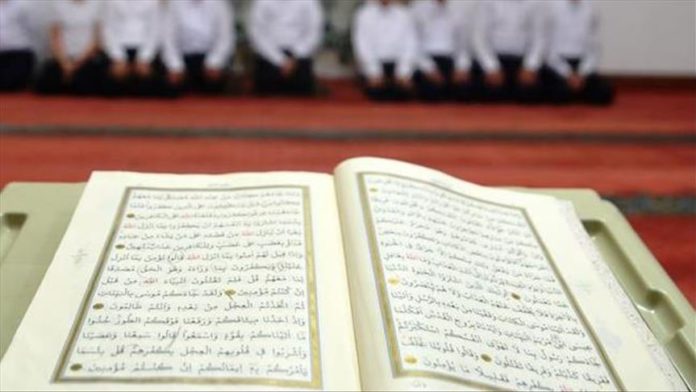 Pakistan has made learning the Quran in Urdu translation mandatory for all students nationwide, except for non-Muslims, so they can better understand their faith in the country’s native tongue and use that knowledge to combat Islamophobia.

The first phase of developing a Single National Curriculum is set to be implemented in all education institutes nationwide, including government, private and semi-private along with madrassas, or religious schools.

“The final draft is ready, as since 2011, education has been a provincial autonomy [In terms of deciding the curriculum and all other decisions also]. We have taken all the provinces on board and they have accepted it,” said Federal Minister for Education Shafqat Mehmood.

“In the first phase, we have made Islamiyat [Study of Quran with Surahs and Hadiths] compulsory from grade 1 to grade 5 students with Nazarah [only reading], and from 6th grade onwards, the translation will be added, so the youth can understand the real essence of our religion, which is peace and harmony,” Mehmood told Anadolu Agency.

Speaking about the details of the decision, he said: “We received some concerns from a limited set of people, but we addressed that, as the quantity of Quran education is the same as it was before. The only difference is that students will learn that part in Urdu so they can understand the actual meaning.”

Most Muslim countries around the world include Quran education in their curriculum, he noted.

“I have visited Turkey and read about the excellent Imam Hatip school system also. It is important to include our religious education with the modern one to achieve a successful life,” said Mehmood.

In 2017, the National Assembly of Pakistan approved the Compulsory Teaching of the Holy Quran Bill, which was later passed by the country’s president at the time, Mamnoon Hussain, and turned into an Act according to which Quranic education is compulsory for Grade 1 through Grade 12 in all federal educational institutions in the country.

While addressing the criticism of some educationists, Mariam Chughtai, a member of the National Curriculum Council, said: “All the provinces agreed to implement the act. People who are criticizing it now should understand that the decision is three years old. We are just implementing it.”

“It is too early to discuss the output of this curriculum yet, as the students will get the upgraded textbooks in March 2021. The new curriculum is an updated version of the already set curriculum of 2006. The only difference is that now students have to complete the Nazarah of Quran till grade 5, which was set till grade 8 before.” Chughtai told Anadolu Agency.

Prime Minister Imran Khan introduced the Single National Curriculum policy in 2020. He assured the public that the education disparity among students would be reduced.

“It is our first step to synthesize and align our curriculum so it does not create social classes [based on the education system],” Khan had said while addressing a public event.

The country’s parliament on July 14 unanimously adopted a resolution calling on the government to make the teaching of the Holy Quran in the Urdu language compulsory at all universities and higher education institutions affiliated with the federal government.

“According to the constitution, Pakistan is officially a state in the Islamic republic and the Holy Quran and Sunnah should be considered the Supreme law. It is therefore necessary to take reasonable precautions to understand the Holy Quran in universities,” the resolution said.

The Sunnah is a way or manner of life relating to the traditions and practices of Prophet Muhammad that are models to be followed by Muslims.

The resolution came after the governor of the northeastern province of Punjab, Chaudhry Muhammad Sarwar, issued a notification to make Quran education mandatory for university graduates with “translation” in April this year, in his capacity as the chancellor of the universities.

In Pakistan, the governor of a province also acts as the chancellor of universities in the province.

“I was very curious about the reaction of all the vice-chancellors to my proposal, but it got unanimously approved not only by the chancellors but by all other provinces. It shows the willingness of people to get close to the message from Allah,” Sarwar told Anadolu Agency.

The notification states that the Holy Book would be taught in addition to Islamic studies, which are already being taught at universities. And students, except non-Muslims, will not be getting their degrees until they pass this course

“Due to the language barrier, our young generation was not able to understand or implement the holy book in their routine life. This decision will help our young generation in fighting against Islamophobia, and internationally they could be in a better position to endorse peace and harmony,” said Sarwar.

Roadmap for implementation of the decision

In April, Sarwar formed a seven-member committee of vice-chancellors to submit recommendations on how to make the teaching of the Quran with translation compulsory in all universities in the province.

While discussing the recommendations, Professor Niaz Ahmad, vice-chancellor of Punjab University and the head of the committee, said “the Quran course will be equivalent to one credit hour per year as the relevant university feels appropriate, and as a substitute, the non-Muslim students may be offered the subject of ethics.”

“The student has to take this course only one time after Intermediate (12th Standard) till Ph.D. This decision is only for the students who are on campus. Private students do not come under this decision,” Ahmad said.

“Further details and criteria will be more clear to the students after they start attending the universities after Sept. 15,” he told Anadolu Agency.

Rab Nawaz, who is pursuing a Bachelor’s degree at the University of Management Technology, said they have not been informed about any further changes in the curriculum.

“I have almost completed my third semester. The government has announced that educational institutes will be open from Sept. 15, but there is not a single notification or debate on campus with the students regarding this decision of Quran education,” he added.

Educationists in the country seem divided about this decision and they have started a debate on national and social media whether so much religious education should be a part of the national curriculum or not.

Abdul Hameed Nayyar, a physicist, told Anadolu Agency that the government has to be very cautious about this decision, as it can also lead to religious extremism.

“Religion and modern education should be balanced properly. Setting a balanced curriculum is a tough job for the government,” Nayyar said.

Turkey's foreign trade gap at $5B in November