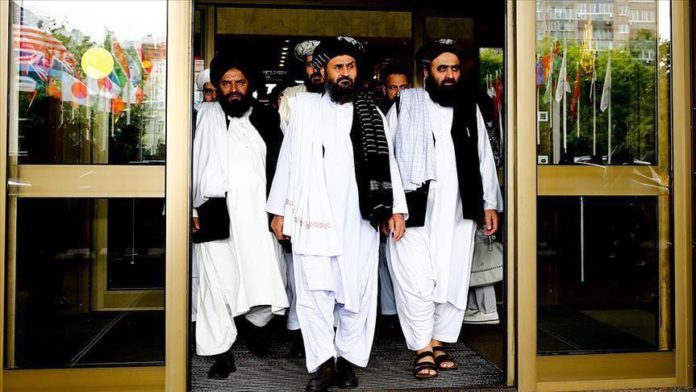 The two sides discussed the latest developments in the reconciliation process, with special focus on intra-Afghan dialogue, which aims to end an 18-year conflict in the war-torn country, said a Foreign Ministry statement.

The Taliban side, it added, told Qureshi about the implementation of the Doha peace deal with the US.

Reiterating Islamabad’s support for the peace process, Qureshi warned the Taliban about the “spoilers” that, according to him, want to sabotage the fragile peace process, which has been derailed time and again in the near past.

Islamabad, he added, would continue to play its role to ensure durable peace in the war-stricken country.

He also urged the international community to play a role for creation of employment opportunities, the respectable return of millions of Afghan refugees, and the country’s economic durability.

The Taliban, for their part, thanked Islamabad for its continuing efforts and mediation in the ongoing process, the statement added.

Later, speaking to reporters, Qureshi said the Taliban were fully committed to the Doha agreement.

He said the two sides discussed ways of fully implementing the landmark deal.

“Talks with Taliban were constructive, and encouraging. We discussed the developments since October 2019 to date to reach a solution,” he said, according to local broadcaster Geo News.

“Pakistan believes there is no military solution of the Afghanistan problem. Talks are the only way to resolve this issue,” he went on to argue.

The Afghan Taliban delegation arrived Monday morning in Islamabad to discuss the peace process with the Pakistani leadership ahead of the expected intra-Afghan dialogue.

The development came days after the Afghan government released some 80 key Taliban figures to pave the way for direct peace talks. The move was part of a prisoner swap deal, following a landmark peace agreement between the US and Taliban in Qatar’s capital Doha this February.

In December 2018, Pakistan arranged rare direct talks between Washington and the Taliban, which led to the Doha peace deal this February.

Islamabad also facilitated the landmark first round of direct talks between the Afghan government and the Taliban in Islamabad in July 2015. That process broke down after the Taliban announced the death of their long-time leader Mullah Omar, triggering a bitter internal power struggle.

Islamabad’s influence over the Taliban is viewed as crucial to court the warring militia over the expected intra-Afghan dialogue, which the militia has long refused.