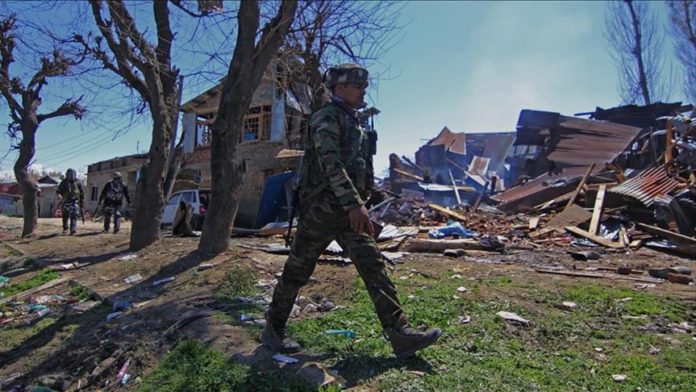 Pakistan on Friday accused India of continuing “extra-judicial killings” of innocent Kashmiris, calling for impartial investigations to be carried out under international supervision.

“Extra-judicial killings in the Illegally Occupied Jammu and Kashmir by the Indian Occupation forces continued unabated during the past week as well, and ten more Kashmiris were martyred in Pulwama and Shopian districts,” Foreign Office Spokesman Zahid Hafeez Chaudhri told a weekly news briefing.

Indian security forces on Friday claimed to have killed seven militants including a top leader of the Ansar-ul-Ghazwat-ul-Hind, in separate gunfights in the Jammu and Kashmir’s Pulwama and Shopian districts in the past 24 hours. So far this year, over 30 people have been killed in clashes with Indian forces.

“Pakistan has repeatedly called for independent investigations under international scrutiny, into the extra-judicial killings of all innocent Kashmiris,” Chaudhri said.

The statement came a day after the Pakistan military said it stands in “complete solidarity” with the people of Kashmir in their struggle for the right to self-determination.

He added that his country consistently stresses the need for unhindered access to UN human rights bodies, international human rights groups, and the media to assess the human rights situation in Kashmir.

“We are also concerned over the continuing military siege, incarceration of Kashmiri leadership, unprecedented restrictions on fundamental freedoms of the Kashmiri people and ongoing efforts to change the demographic structure of the occupied territory, in clear violation of international law, in particular the 4th Geneva Convention,” he said.

India always claims that its security forces target militants, but Islamabad rejects this rationale, saying Indian forces are killing innocent people who are struggling for the right to self-determination under UN Security Council resolutions.

Last year, the Indian army admitted in a statement that in July, its soldiers in southern Kashmir overstepped their authority by killing three civilians who were not militants.

That month, three young cousins who had left home for work in Shopian were killed by the Indian army, which falsely labeled them militants.

Kashmir is held by India and Pakistan in parts and claimed by both in full. China also holds a small sliver of Kashmir.

According to several human rights groups, thousands of people have been killed in the region’s conflict since 1989.

India’s former NSA cautions jumping on US bandwagon against China