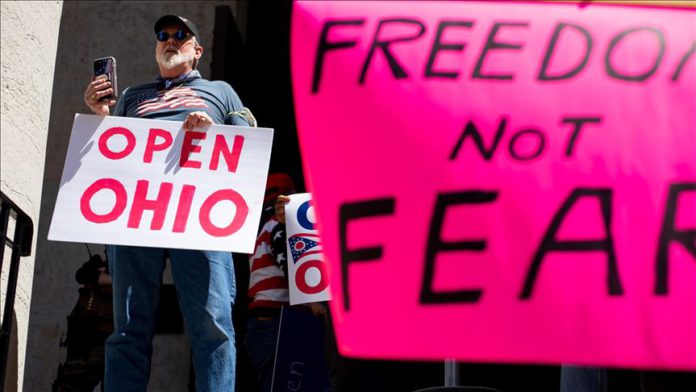 Over half of the states in the US will soon begin the gradual process of ending restrictions on businesses and daily life that were imposed to contain the spread of the novel coronavirus.

At least 31 of the 50 US states will start to reopen to varying degrees within the coming days, according to a CNN tally, taking various approaches on how the process will be carried out amid varying levels of infection and fatalities in each locality.

President Donald Trump said Wednesday he will not be renewing them amid the economic devastation caused by the virus, which has sent the country into a recession.

US unemployment claims have soared after data released Thursday indicated that over 30 million people have applied for unemployment benefits in the six weeks since mass business closures began to take effect.

But while the economic blow of the coronavirus has been dire, so too has the mortality inflicted. More than 62,000 Americans have died since the pandemic first hit US shores.

Even as the virus’ ramifications have been felt nationwide, the Constitution grants the power of issuing health emergency laws to states, and it will be governors who will carry out their easing.

That means reopening will be done in a patchwork fashion, with some coordination among states regionally while others, like Georgia, opt to go it alone despite calls from their neighbors not to do so.

In the northeast, which sees a high amount of cross-state traffic between dense population centers, New York is collaborating with Delaware, New Jersey, Connecticut, Pennsylvania and Rhode Island to coordinate their effort.

New York Gov. Andrew Cuomo indicated Monday that virus hospitalizations must be on the decline for 14 days before reopening can begin and when it begins, it will have to be carried out in phases accompanied by mass available testing.

Like the northeast, the U.S. western states of California, Washington and Oregon have said they will coordinate their processes

Washington, D.C., Maryland and Virginia have all indicated their reopening could still be far out as coronavirus cases continue to mount around the capital region where droves of federal workers, officials and elected representatives live, even if only part-time for the latter group.

D.C. Mayor Muriel Bowser has extended her stay-at-home order until May 15 and has indicated that the capital may continue to face restrictions in one form or another beyond that period. D.C. officials are hoping for a limited return to normalcy in May but have suggested that could be delayed well into the summer.

In abutting Maryland, meanwhile, Gov. Larry Hogan set out the benchmarks for easing the statewide stay-at-home order he issued on March 30. But with cases and hospitalizations continuing to rise, it is unlikely the state will be reopening anytime soon.

Hogan’s order does have a sunset clause, leaving its length uncertain, unlike that of Virginia Gov. Ralph Northam, whose directive expires June 10.

Northam has indicated that like Cuomo, he wants to see a 14-day downward trend before the process can begin, as well as much more available testing.

Still, a wide gamut of states from Alaska to Florida are easing into a partial reopening that in almost all cases will continue to impose restrictions on businesses, such as enforced reductions in operations, social distancing measures and the required use of masks in close personal settings.

The US is the country hardest-hit by the global pandemic with 1,067,289 confirmed cases and 62,870 fatalities, according to a tally from Johns Hopkins University in Baltimore, Maryland.

Biden: 'We're at war with virus, not with one another'