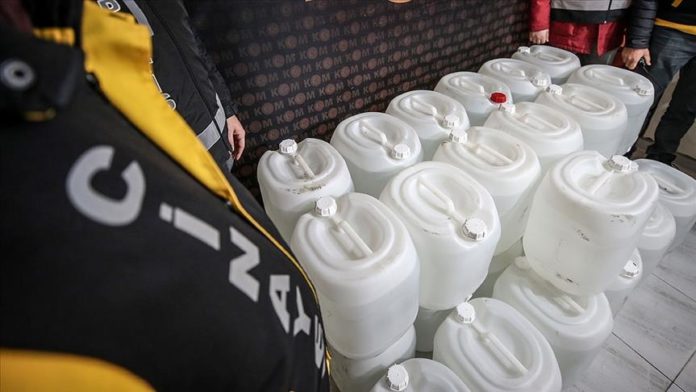 Eleven suspects were detained Wednesday and at least 5,043 liters (1,3332 gallons) of bootleg alcohol confiscated in operations across Turkey, according to security forces.

About 2,000 liters (528 gallons) of bootleg wine was seized in a cottage by gendarmerie forces in an operation to prevent bootleg alcohol poisonings in central Nevsehir province. The cottage’s owner was taken into custody.

One suspect was nabbed in an operation in the northwestern province of Kocaeli where 110 liters (29 gallons) of ethyl alcohol was confiscated after authorities received a tip-off.

Local gendarmerie teams conducted a raid in Mudanya in the northwestern province of Bursa acting on a tip, and seized 123 liters (32 gallons) of bootleg wine and 10 liters (3 gallons) of ethyl alcohol. The suspect at the address was taken into custody.