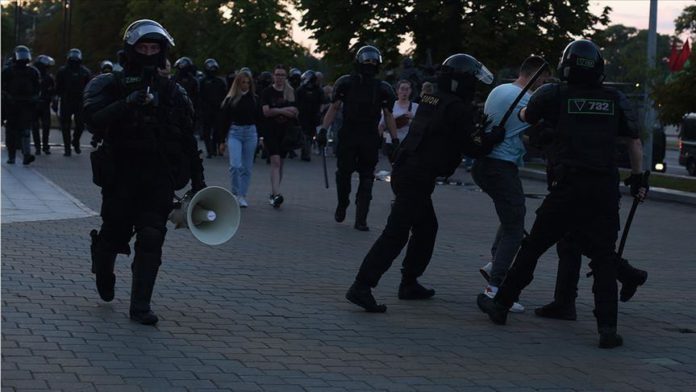 More than 3,000 people have been arrested in Belarus as protests continued for a second day after incumbent Alexander Lukashenko was declared the winner of Sunday’s presidential election.

She said a man died on Monday after an explosive device, which he was trying to throw at security forces, detonated in his hand.

“During the confrontation with the special forces, one of the protesters tried to throw an unidentified explosive device into the ranks of law enforcement officers. It exploded in his hand and his injuries proved fatal,” she said.

According to Chemodanova, 39 security personnel and more than 50 civilians were injured in the demonstrations as protesters used stones, smoke bombs, and Molotov cocktails.

In a separate statement, the Health Ministry said over 200 people have been hospitalized with injuries of varying severity.

With protests expected to continue, the government increased deployment of troops and anti-riot forces in Minsk and other big cities on Tuesday.

Opposition candidate Svetlana Tikhanovskaya, who has disputed the election results and said the polls were rigged, posted a video announcing that she has voluntarily left Belarus for Lithuania.

In the video, she thanked people for supporting her presidential bid and urged protesters to respect the law and shun violence.

“The people of Belarus have made their choice. With gratitude and warmth, I appeal to all the citizens who have supported me all this time. Belarusians, I urge you to be reasonable and respect the law. I don’t want blood and violence,” she said.

“I ask you not to stand up to the police, not to go out on the square, so as not to put your lives in danger. Take care of yourself and your loved ones.”

Tikhanovskaya’s video, her hasty departure, and changed stance on the election result have sparked speculation that she was pressured to leave the country.

In a separate statement, another iconic figure of the Belarusian opposition, Valery Tsepkalo, who fled to Russia to evade arrest before the election, said the opposition was going to lobby for the international community to recognize Tikhanovskaya as Belarus’ rightful president.

The clashes in Belarus have provoked deep concern throughout Europe.

On Tuesday, European Commission President Ursula von der Leyen called for the election results to be published, saying harassment and repression had no place in Europe.

He called for the release of detained protesters and said the EU could even reinstate the sanctions it recently lifted from Belarus.

Other EU countries also expressed support for the demonstrators, with neighboring Ukraine’s President Volodymyr Zelensky saying that doubts over the election were “a direct road to violence, conflict and growing public outcry.”

Britain also called on the Belarus government to “refrain from further acts of violence following the seriously flawed Presidential elections.”

“The violence and the attempts by Belarusian authorities to suppress protests are completely unacceptable,” James Duddridge, parliamentary undersecretary of state in the Foreign and Commonwealth Office, said in a statement.

“Throughout this election campaign we have witnessed the demands of the Belarusian people for democracy, for fundamental freedoms and for the right to determine their futures in an independent, sovereign Belarus.”

He added: “The UK, along with our international partners, calls on the Government of Belarus to fulfil its international commitments and the aspirations of its people.”

Latvia’s Foreign Minister Edgars Rinkevics, in a statement on behalf of his counterparts from Estonia, Finland, and Poland, said all four countries “completely support” Warsaw’s proposal to call a meeting of the foreign ministers’ council to discuss and formulate “a joint, united position” with regard to Belarus.