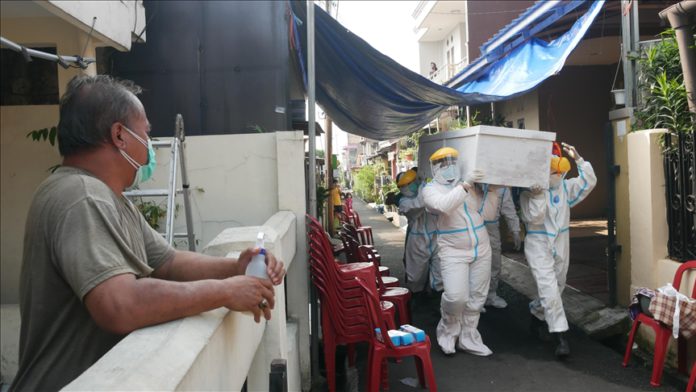 A total of 2,707 people in Indonesia have died while undergoing self-isolation due to COVID-19 since June, LaporCOVID-19, a civil society coalition that crowdsources coronavirus information throughout the country, said on Thursday.

Jakarta reported the highest number of deaths with 1,218, followed by West Java 701 and Yogyakarta 307.

“Most patients died because their conditions were not monitored by healthcare professionals or were treated too late as hospitals are running at capacity,” the group explained.

The situation has forced many patients with moderate to severe symptoms to undergo self-isolation. Besides, misinformation and rumors are also keeping people away from hospitals.

Fariz Hibban, a data analyst at LaporCOVID-19, said that only the DKI Jakarta provincial government and Yogyakarta Regional Disaster Management Agency (BPBD) have provided official data regarding COVID-19 patients who died while self-isolating.

“We found that as many as 19,838 deaths were unreported,” the official said.

Based on the recapitulation of data per province collected by the team, fatalities due to COVID-19 stood at 100,436 nationwide as of July 23. But the Health Ministry reported 80,598 deaths during the same period.

The report also revealed that 22,926 patients died with a “probable” status – experienced COVID-19 symptoms, but had not been confirmed positive.

The fatalities from COVID-19 in Indonesia quadrupled in July compared to the previous month, according to an official.

Wiku Adisasmito, a spokesperson for the country’s COVID-19 task force, said the death toll recorded in July stands at 30,168 as of Wednesday, compared to 7,913 virus-linked deaths in June.

“July is the month with the highest number of deaths in Indonesia since the pandemic started,” Adisasmito told a virtual news conference.

Siti Nadia Tarmizi, the director of Prevention and Control of Direct Infectious Diseases at the Health Ministry, said fatalities surged as many people refused to be quarantined in centralized facilities.

“Many people did not want centralized isolation and came to health facilities in critical conditions,” Tarmizi told Anadolu Agency.

Meanwhile, the ministry confirmed 43,479 new cases, taking the tally to over 3.33 million.

The number of recoveries rose to 2.68 million after 45,494 more patients won the battle against the virus.

Indonesia has administered at least 65.9 million doses of COVID-19 vaccines so far. Around 46.2 million Indonesians have received their first dose, while 19.6 million are fully vaccinated.