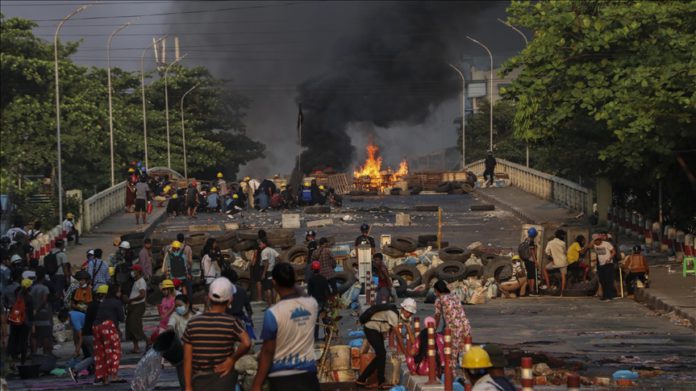 More than 200 people have been killed in Myanmar since the Feb. 1 military coup, said a human rights group on Thursday.

The Assistance Association for Political Prisoners (AAPP) said it had collected details of the deaths at the hands of Myanmar police and security forces since the coup, and with nine more protesters killed on Wednesday, the count now stands at 217.

“This is the number documented and verified, the actual number of casualties is likely much higher,” the group said in a report.

As of March 17, a total of 2,191 people had been detained, convicted, or sentenced in cases related to protests against the military coup, according to the AAPP, an independent non-profit organization founded by former Burmese political prisoners living in exile.

The report said the military coup leader used violent tactics in March to silence critics, with police and troops firing live bullets at protest rallies across the country.

“Even protesting children and women were targeted,” it added.

The group said the junta forces committed mass murder, looted, and destroyed private and public property, including bridges, in a systematic manner.

The AAPP said such actions have occurred in South Okkalapa in Yangon, Bago, and Kawa in the last two days.

“Whenever they carry out these violent actions, the coup propaganda media accuses the people of being violent perpetrators,” it said.

Meanwhile, the State Sahgha Maha Nayaka Committee, a government-appointed Buddhist monks’ body, announced the suspension of its activities and urged the junta to stop the detention, torture, and killing of unarmed civilians, as well as the loot and destruction of public and private property, local media Myanmar Now reported on Wednesday.

Wife of Christchurch victim thanks Turkey for support