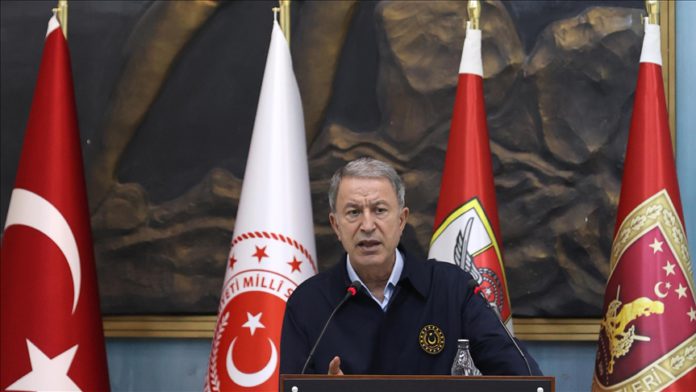 After holding video conferences with commanding officers of military contingents stationed within and beyond Turkey’s borders, Akar addressed personnel at the base.

He stressed that at least 18,220 terrorists had been neutralized since July 24, 2015, including 1,366 since the beginning of 2021. “No one should doubt that our struggle will continue until the last terrorist is neutralized,” he said.

Turkish authorities use “neutralize” to imply terrorists in question surrendered or were killed or captured.

Akar said that the Turkish Navy sailed for roughly 200,000 hours last year, with the number of commando divisions in the military increasing from just two to 17, all of which are on active duty and engaged in missions.

The Turkish Armed Forces has grown stronger, more efficient and motivated since the July 15, 2016 defeated coup by the Fetullah Terrorist Organization (FETO), he remarked.

Turkey respects its neighbors’ territorial integrity and expects them to reciprocate with the same policy toward Turkey, noted Akar.

Underlining that the PKK and YPG in Syria are the same terrorist organization, Akar said that some countries, some of which are Turkey’s allies, continue to provide YPG with arms and equipment despite the proof of their connections.

Since 2016, Turkey has launched a trio of successful anti-terror operations across its border in northern Syria to prevent the formation of a terror corridor and enable a peaceful settlement of residents: Euphrates Shield (2016), Olive Branch (2018) and Peace Spring (2019).

In its more than 30-year terror campaign against Turkey, the PKK – listed as a terrorist organization by Turkey, the US, and EU – has been responsible for the deaths of 40,000 people, including women, children and infants. The YPG is the PKK’s Syrian offshoot.

On Afghanistan, Akar reiterated Turkey’s military contribution to NATO missions there since 2002.

Turkey’s primary aim has been to contribute to Afghanistan’s security, prosperity and peace, he added.

Turkey, whose forces in Afghanistan have always been consisted of noncombatant troops, is reported to have offered to guard the Kabul airport as questions remain on how security will be assured along major transport routes and at the airport, which is the main gateway to the capital.

Marriages in Taiwan decline due to COVID restrictions