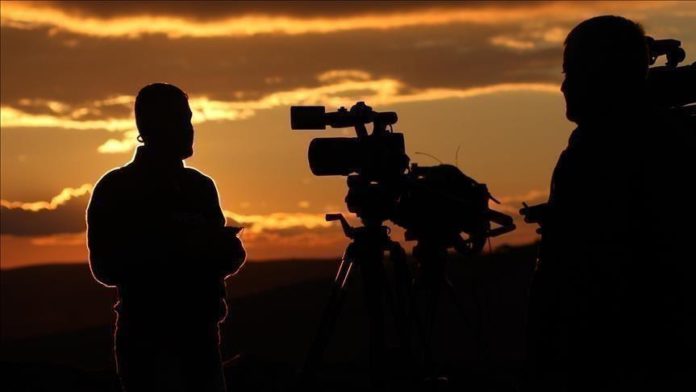 Over 180 journalists, including the editor of top business daily The Financial Times, were selected for possible surveillance by governments using surveillance technology made by Israel’s NSO Group, Britain’s The Guardian reported on Sunday.

NSO is an Israeli surveillance company that makes spyware for governments.

Its main product is called Pegasus, which The Guardian said could compromise targets’ phones, extract their data, read their messages, harvest their address books, listen to their calls, track their movements, and activate their microphones, allowing clients to record conversations.

Roula Khalaf, The Financial Times’ first female editor, was listed as a potential target during 2018.

Her number was included on a leaked list of cellphone numbers chosen for potential surveillance by NSO clients.

The Guardian reported that the leaked data suggested Khalaf’s phone was selected as a possible target by the United Arab Emirates. Khalaf was the FT’s deputy editor at the time.

A Financial Times spokesperson was quoted by The Guardian as saying: “Press freedoms are vital, and any unlawful state interference or surveillance of journalists is unacceptable.”

Amnesty International and Forbidden Stories, a journalism non-profit, shared the leaked records with The Guardian and a few other outlets.

The leaked data showed that as well as the UAE, other governments that selected possible surveillance targets could include Bahrain, Hungary, India, Kazakhstan, Mexico, Morocco, Rwanda, Saudi Arabia, and Azerbaijan.

Anadolu Agency has not independently verified these claims.

He added: “It targets the journalistic activity in a way that almost fully impedes it in situations where journalists are being threatened.”

“There are not enough safeguards about the export of the software,” he said.

“Spyware has been sold directly to governments with terrible press freedom records, which is hard to understand.”

The Guardian reported that NSO insists the governments who use Pegasus are bound by contract to only use it to fight “serious crime and terrorism.”

NSO’s lawyers were quoted by The Guardian as saying the company did not have access to the data of its customers’ targets. They also suggested that the phone numbers in the leaked data could have been part of another, larger list of numbers used by their clients “for other purposes” and not necessarily as surveillance targets.

While denying the “false claims” made about its clients, the Israeli company said it would “continue to investigate all credible claims of misuse and take appropriate action,” adding that it had shut off access to Pegasus to clients where abuse had been confirmed.

The company added: “NSO Group is on a life-saving mission, and the company will faithfully execute this mission undeterred, despite any and all continued attempts to discredit it on false grounds.”