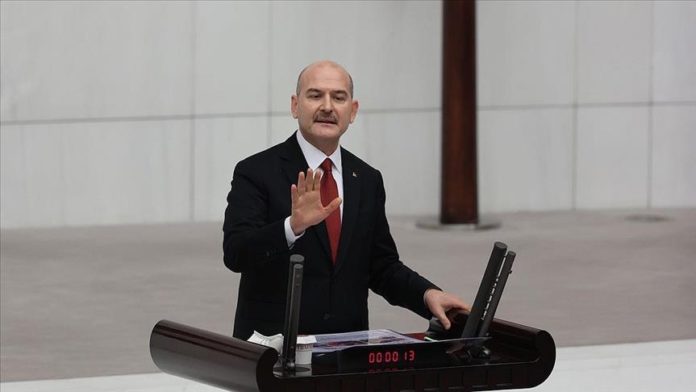 Over 113,000 irregular migrants have been held in Turkey in 2020, way too low a number than what was expected, due to the novel coronavirus pandemic, said Turkey’s interior minister on Friday.

“The number of irregular migrants held in 2019 was 454,662. We were expecting that number to be around 500,000 in 2020. But due to COVID, the number stands at 113,865 till now,” Suleyman Soylu told Migration Board Meeting on the occasion of the International Migrants Day.

Stressing that migration is a historical reality, Soylu said migration is now seen as a social threat in 21st-century Europe “held captive by racist ideas.”

“Utilizing death, fear, and insecurity, imperialism constructs a two-part world in the form of the elite and others,” Soylu said.

He noted that Turkey neighbors almost all countries which are sources of migration and said, besides, it has intense historical, cultural, and religious relations with those countries.

“Migration has existed throughout the history of the world, but there is no example of an impoverished, collapsed, and ruined country because of migration,” he said.

He recalled that Dec. 18 has been marked as International Migrants Day since 2000, and said, however, this step taken by the UN with good intentions has become a symbol of irony today.

Migration, no doubt, brings along some problems, he said, noting that the key to making it beneficial was the integration of those people into the society.

Soylu also said Turkey, as a civilized country, prefers to manage migration instead of fighting it and added: “Because human history started with migration and will continue with the migration.

“Countries which acknowledge and manage migration will benefit from it.”

With nearly 4 million Syrians, Turkey is the country hosting the highest number of refugees in the world.