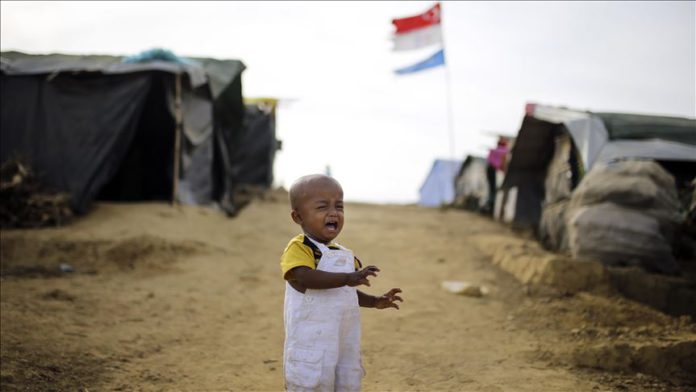 An estimated 108,037 Rohingya children have been born in refugee camps in Bangladesh and Myanmar over the past several years amid unsuitable living conditions, according to a new study.

They have limited access to education and healthcare, no freedom of movement and are almost entirely dependent on aid, an analysis by the humanitarian aid organization Save the Children found.

Save the Children analyzed population data from the refugee camps in Bangladesh since August 2017 and the displacement camps in Myanmar’s Rakhine State since 2012 to mark three years since more than 700,000 Rohingya fled Myanmar in the wake of brutal violence which the UN has described as a “textbook example of ethnic cleansing.”

There are currently an estimated 75,971 children under three years old in the refugee camps in Cox’s Bazar, or 9% of the total refugee population, nearly all of whom were born after their mothers fled from Myanmar, the study added.

More than 1 million Rohingya refugees are living in Bangladesh, and nearly half of them are children.

“I’m worried about my children’s education, their future, their behavior,” Hamida Begum, the mother of three-year-old Runa, told Save the Children.

They are currently taking shelter at a refugee camp on the south coast of Bangladesh Cox’s Bazar.

“I can’t give them whatever they ask for as we don’t have money. We can’t fulfil their dreams. We can’t love and take care of them properly. That’s why I feel very sad. I can’t provide them with good food. When they ask for anything, I can’t give it to them,” she said.

Runa has suffered from chronic undernutrition her whole life.

In Myanmar, displacement camps in Rakhine State have been housing Rohingya Muslims as well as Kaman Muslims since 2012 following previous waves of ethnic violence.

Using UNHCR data from Myanmar up to December 2019, Save the Children estimates there are 32,066 children under seven years of age spread across 21 camps, representing over 25% of the displaced population.

“The birth of a child is a joyous occasion […] We teach our children to dream big, but for a child who knows nothing but a refugee camp, many of their hopes and dreams will seem out of reach. The people and government of Bangladesh welcomed the refugees when they fled violence in their home country, but three years on, we are no closer to a sustainable solution to this refugee crisis,” said Onno van Manen, Bangladesh Country Director for Save the Children.

“Rohingya children and families must be able to return to their homes in Myanmar voluntarily and in a safe and dignified manner. World leaders – particularly those with close ties to Myanmar – must do everything they can to encourage a swift resolution to this crisis. We can’t allow the years to pile up and for children to spend their entire childhoods in confinement,” Manen said.

Nay San Lwin, co-founder of the Free Rohingya Coalition, told Anadolu Agency that “they (Rohingya children) all deserve the conditions all global citizens have. Unfortunately, the world’s leaders are failing us.”

“Formal education for the children is very important. I saw a lot of learning centers in the camps, but those are not going to help improve [their] education,” he said, adding these children “won’t have a future at all unless the world unites to act against the ongoing genocide in Myanmar.”