TurkishPress
Home News Over 100,000 olive trees uprooted by Israel since 2010 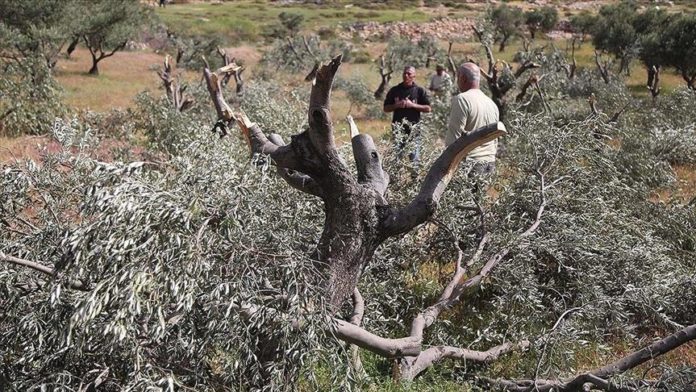 Israel has destroyed more than 100,000 olive trees in the West Bank since 2010, according to Palestinian NGOs.

He said the attacks have caused losses of $47 million to Palestinian farmers.

Fkhaida said settler attacks have escalated in recent weeks as a result of calls by ultra-radical Jewish leaders as Neseam Moufel and Shlomo Retsaken on their supporters to uproot olive trees belonging to Palestinians.

Jamal Jomah, the head of the Palestinian Grassroots Anti-Apartheid Wall Camping — a coalition of Palestinian non-governmental organizations — said more than 8,400 olive trees were destroyed in Israeli attacks this year.

“2020 was one of the hardest years for Palestinian farmers,” he told Anadolu Agency.

“Settler attacks are coordinated against our farmers and volunteers,” he said, citing that a Palestinian elder had his skull fractured in one of recent settler attacks.

On Saturday, several Palestinian farmers were beaten by Jewish settlers in the “Masafer Yatta” village south of the West Bank.

Eyewitnesses told Anadolu Agency that a group of settlers assaulted Palestinian farmers and shepherds in the area.

According to witnesses, settlers, under protection of the Israeli army, have prevented Palestinian farmers from planting olive trees on their land near Jalud High School, claiming that the land lies in areas under Israeli control.