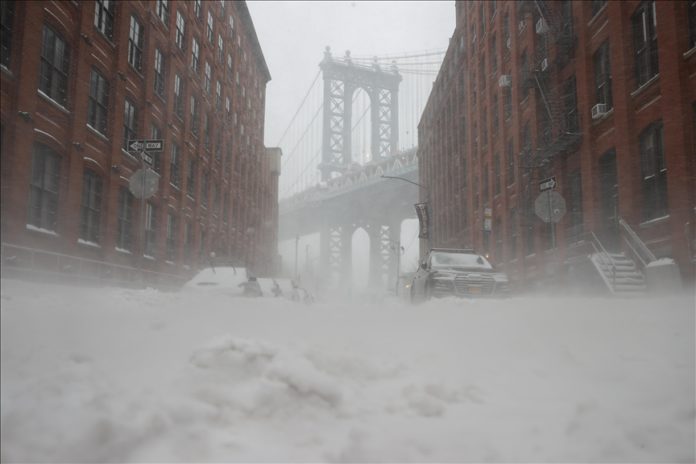 A daunting Nor’easter winter storm left more than 100,000 people without power as it tore through the US East Coast on Saturday with powerful winds and heavy snowfall.

The storm has left more than 113,000 people without power in the state of Massachusetts amid frigid temperatures, according to PowerOutage, a tracking website.

Scattered outages were also reported in other northeastern states, including New York, where over 600 people have been left without power.

Coastal areas are bearing the brunt of the blizzard with coastal flooding reported.

Wind gusts are surging more than 60 miles per hour (97 kilometers per hour) in parts of the New England region with strong snowfall recorded from Rhode Island to North Carolina. The city of Bayville, New Jersey has recorded 19 inches (48 centimeters) of snow with about the same amount found just to the south in Bay Shore, New York.

Blizzard conditions are expected to persist as the storm moves through Maine with snow rates expected to reach 3 to 4 inches (1.1 to 1.5 centimeters) per hour in some areas, particularly in coastal and Downeast Maine before the storm moves to higher elevations later in the day.

The heaviest snow rates are expected to slow beginning around 4 – 5 p.m. local time.

States of emergency have been declared in several states, including Maryland, Massachusetts, New Jersey, New York and Rhode Island.

Maryland Governor Larry Hogan has mobilized the state’s National Guard with 125 soldiers positioned at armories on the hard-hit Eastern Shore and in southern Maryland.

The storm has led to widespread flight cancelations across the East Coast with New York City’s LaGuardia Airport announcing 98% of scheduled flights Saturday have been canceled.

There have been 3,560 flights canceled across the US with major airports on the East Coast accounting for the lion’s share of all halted flights, according to FlightAware, a flight-tracking website.

New York City’s JFK International has called off 80% of all flights while Newark Liberty International in neighboring New Jersey has canceled 90%.

Boston’s Logan International Airport has canceled 91% of all flights, according to the tracker.