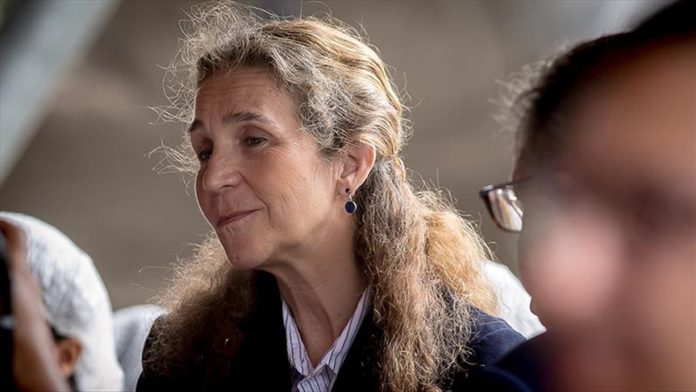 The two sisters of Spain’s King Felipe VI found themselves at the center of a political storm on Wednesday after it was confirmed that they were administered COVID-19 vaccines in Abu Dhabi.

Spain’s Infanta Elena and Infanta Cristina got the shot when they traveled to visit their father, King Emeritus Juan Carlos I last month.

The former king has been living in Abu Dhabi since August, after he suddenly left Spain amid allegations of corruption and financial misconduct.

In a statement sent to several Spanish media outlets, Elena explained that “both my sister and I went to visit our father with the intention of getting a health passport that would allow us to visit on a regular basis. The vaccine was offered to us and we accepted it.”

Spain’s monarchy also released a statement on Wednesday, insisting that the immediate royal family — Spain’s King Felipe, Queen Letizia and their daughters — would await their turn to be vaccinated in Spain.

Both in their 50s, neither of the king’s sisters would have qualified for a COVID-19 jab in Spain, causing several high-profile politicians to slam their behavior.

“In a society where the debate is growing every day about the usefulness of the monarchy, the royal family doesn’t stop providing new scandals that produce an enormous amount of outrage in a large section of society,” said Spain’s Deputy Prime Minister Pablo Iglesias in response to the news.

“Here, there are a lot of Spanish citizens who are patiently waiting in line until it’s their turn to get vaccinated.”

Other Spanish ministers from Iglesias’ far-left Podemos party called their decision to get vaccinated “unpleasant and ugly,” and “an abuse of privileges.”

Even ministers from Spain’s Socialist Party, who are usually less critical of the monarchy, said the move was “terrible,” and “surprising.”

“It’s disgraceful that someone can use their position to jump the cue,” said Miquel Iceta, minister of territorial policy.

In a rare convergence of opinion, members from the center-right party Ciudadanos and the Catalan independence movement also disparaged the princesses.

Members of Spain’s conservative Popular Party and the far-right party Vox were more forgiving. The mayor of Madrid said it was a “personal decision” that “didn’t take away the vaccine from any Spanish person.”

The UAE is one of the world’s leading countries in terms of COVID-19 vaccination. Already, around 35% of its population has received at least one dose. In Spain, on the other hand, that figure is around 5%.

This is not the first time Infanta Cristina has been caught up in such a political controversy. In 2016, she was tried for fraud but was later acquitted. Her husband, Inaki Urdangarin, was convicted of embezzling millions of euros and sentenced to five years and 10 months in prison.