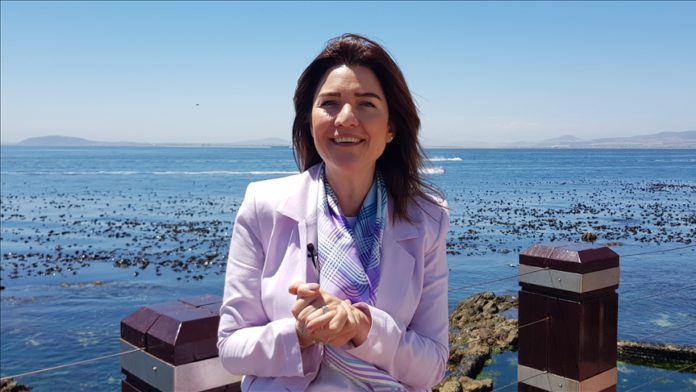 “I was the first Turkish ambassador to witness the rebounding and reunion of Ottoman-origin residents in South Africa who received Turkish citizenship,’’ said Ulgen, who assumed the office of Turkish envoy in Pretoria in February 2017.

Some of those granted citizenship included descendants of the late Ottoman era prominent scholar Abu Bakr Effendi. He was deputed to South Africa in the 19th century by Sultan Abdul Aziz Khan to spread the message of Islam.

Today many of these Turkish descendants are well-known in South Africa, some of them holding positions of judges, doctors, and even politicians.

Ulgen said many other Ottoman-origin descendants in the country will continue to receive Turkish citizenship. A Turkish presidential decree grants citizenship to Ottoman-era Turkish descendants.

Turkish diplomat in Pretoria is leaving the country, after completing her tenure with a gratifying feeling of playing a role and witnessing the inauguration of several Turkish state institutions opening their representative offices in the country.

“When I came here in February 2017, there were no state representative agencies, but two months later, I witnessed the opening of the Yunus Emre Institute, (Turkey’s overseas cultural center) in Johannesburg in April 2017,’’ she said.

The Turkish Cooperation and Coordination Agency (TIKA), which distributes aid to different countries, also opened its office in the capital Pretoria in August 2017.

A few months later in 2018, Maarif Foundation, an arm of the Turkish education sector, also opened a representative office in South Africa.

“Meanwhile amid the pandemic in September 2020 we inaugurated the Turkish consulate in Cape Town,’’ said the Turkish diplomat in Pretoria with a smile.

She expressed happiness for leaving an enlarged Turkish family behind in South Africa.

“The high point of my stay in South Africa was when Turkey’s President Recep Tayyip Erdogan honored an invitation extended by South African President Cyril Ramaphosa to attend a summit of the BRICS countries (Brazil, Russia, India, China, and South Africa) held in Johannesburg in 2018,’’ she said.

It was during this visit that Erdogan officially opened the newly constructed Turkish embassy premises in the capital Pretoria.

Ulgen said over the past four years, she has witnessed the Turkish mission expanding in terms of human resources, making it the second most staffed embassy in Africa after Somalia.

The Turkish diplomat said her team has worked hard to promote the bilateral and trade ties between the two friendly nations.

“We have hosted and linked a number of our Turkish companies, traders visiting South Africa to local business partners,” she added.

The diplomat said despite facing a challenge due to the pandemic, Turkish entrepreneurs are still keen on seeking investment opportunities in the South African market.

Due to the pandemic, there is a slight decrease in the volume of trade. Before the pandemic, bilateral trade was over $2billion in 2019. Currently, it is $1.5 billion.

The diplomat expressed confidence that bilateral trade and investments will grow, as soon as the two countries recover from the effects of COVID-19.

She said the increasing number of tourists from South Africa are traveling to Turkey, signifying positive relations. But due to the pandemic numbers of travelers have dropped.

Ulgen also said that due to thriving bilateral relations a record number of South African students had applied for the Turkish government scholarship to study in Turkey.

Ulgen said that South Africa also impressed her due to its firm solidarity with the Palestinian people.

“South Africa’s loud and strong stance on Palestine will continue to impress me. I had the privilege to witness people from different walks of life protesting and showing solidarity with Palestine when it was being bombarded,’’ said the diplomat, who is completing her four-year tenure by the end of this month.

Ulgen was among several diplomats and civil society groups who went to the Palestinian embassy in Pretoria in the middle of May to show solidarity with Palestinians as bombs rained down on their homes and infrastructure in Gaza.

During her address at the time, she thanked the South African media for standing with oppressed Palestinians in their quest for freedom.

The diplomat also said there is a need for more people on the African continent to stand in solidarity with Palestinians because the continent has an equally experienced history of a brutal struggle against colonialism and apartheid.

Many South Africans support the Palestinian struggle because they draw similarities between the Palestinians experiencing Israeli occupation and their own experiences under the previous apartheid regime.

Last month, since the bombing of Gaza, South Africans held several protests urging their government to shut down the Israeli embassy in Pretoria and snap ties with the Jewish state.

Ambassador Ulgen also praised South Africa for the stands it took as a member of the UN Security Council two years ago, often supporting the oppressed people of the world. She also hailed South African President Cyril Ramaphosa’s leadership as chair of the African Union in 2020.

Ulgen who will return to Turkey later this month said South Africa has also inspired her because of its effort to empower women in leadership positions especially in legislative bodies.

She also noted that South African women were resilient and stood for their rights in unison.

“My fondest memories in this country are particularly making friends and working. Throughout my four years I have met and made strong friendships with the diplomatic corps in Pretoria – which has the largest diplomatic community in the world,’’ the diplomat said about the memories of South Africa she will be taking along with her to Turkey.