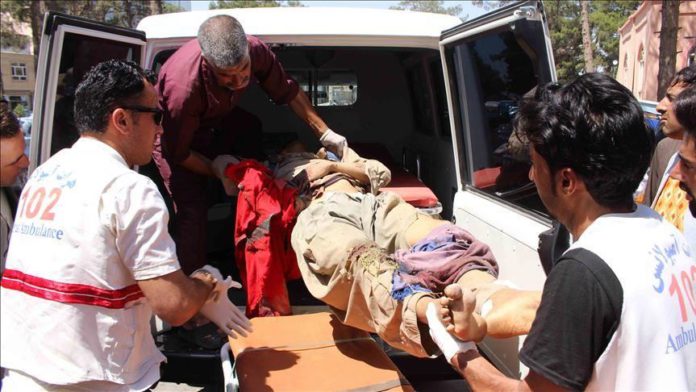 The reported killings of civilians in Wednesday’s air raid in the country’s western Heart province sparked an outcry in the country.

“Some recently freed Taliban [prisoners] have returned to war and even some of them have been killed in fighting,” he said while promising a thorough probe into the raid.

However, local Etelate Roz daily quoted local officials as saying that at least 45 people, including key Taliban figures and civilians, were killed in the air raid in the village of Kham Ziarat here.

The Taliban, however, claimed in a statement that eight civilians were killed and 12 others wounded.

Hours after the raid, Zalmay Khalilzad, the top US peace negotiator, condemned the incident.

In a series of Twitter posts, the US special representative for Afghanistan reconciliation said photos and eyewitness accounts suggest many civilians, including children, are among the victims of the Afghan airstrike.

“We condemn the attack and support an investigation”, Khalilzad said.

“Similarly, we deplore the recent Taliban attacks in which many Afghans have lost their lives,” he went on to say, adding the Afghan people want an immediate start of peace negotiations and a settlement that is in their best interest.

“More graves will not bring negotiations forward”, he said.

The Turkish Embassy in Kabul also condemned the attack.

“Ongoing trend of civilian casualties as a result of indiscriminate use of force during CT [counter-terrorism] operations remains cause for concern. We call for a thorough investigation”, the embassy tweeted.

Meanwhile, the Taliban have said they are ready to begin the long-awaited intra-Afghan talks after the Muslim festival of Eid al-Adha following completion of the prisoner swap.

“The Islamic Emirate [Taliban] is ready to release all remaining prisoners of the other [government] side before the eve of Eid al-Adha provided they release our prisoners as per our list already delivered to them,” Suhail Shaheen, the group’s Qatar office spokesman tweeted on Thursday.

In line with the landmark US-Taliban peace agreement — which was only cautiously welcomed by the Afghan government feeling sidelined — some 5,000 Taliban prisoners should have been released from government prisons in return for the estimated 1,000 captive security forces in March.

However, according to the National Security Council, the government has released some 4,019 Taliban thus far, while the Taliban has released barely half of the 1,000 hostages they agreed to release.