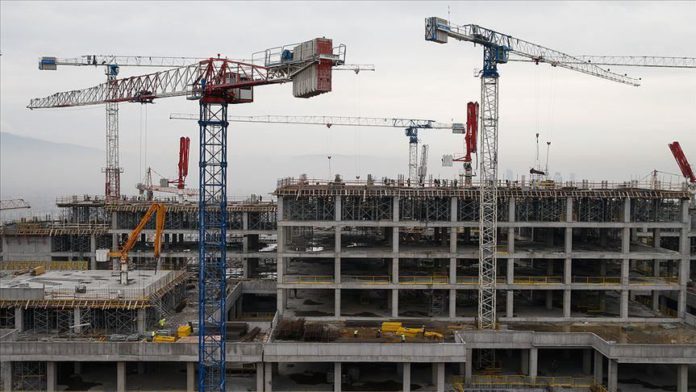 Welcoming July housing sales figures which overcome the gloomy impact of the coronavirus pandemic, the Turkish construction sector is hopeful for 2020 despite expecting a slowdown in the upward trend.

The July figures are “striking,” according to Mithat Yenigun, the head of the Turkish Contractors’ Association.

Spurred by low-interest mortgages state lenders provided in June and July, the surge in July figures is a relief for the companies in the sector, Yenigun underlined.

“The low rates also encourage people to mobilize their savings to buy houses while reviving the economy,” the official told Anadolu Agency.

However, as mortgage rates went up by end-July, the rise in sales will be lower in the coming months, he added.

“I want this upward trend to continue, even if it will at a slower pace,” Yenigun said.

He opined that an annual rise of 45.5% in the given construction permits might be for renewing the document, not for proceeding with new construction.

“This is still a good sign for the economy with it meaning some constructors lay the groundwork for future businesses.”

Echoing Yenigun’s view, Ahmet Erkurtoglu, the deputy head of the Contractors’ Association of Istanbul’s Anatolian Side, underlined that the promising figures, despite the pandemic, were driven by mortgage rates below 1% which he called “psychological limit”.

Erkurtoglu stressed the importance of the rise in July reading as the summer season is generally stable for the construction sector.

He also underlined that interest in summer houses was another reason behind the uptick in figures.

“We may hit another record high number of housing sales by the end of this year,” Erkurtoglu anticipated.

Drawing on the drop in the housing sales to foreign buyers, Erkurtoglu said coronavirus pandemic was the number one culprit which has created a drastic uncertainty worldwide.

Housing sales to foreigners fell 34.6% on an annual basis to 2,741 in July, according to TurkStat data.

“The number of housing units Chinese citizens bought rose 3-fold in January-July,” he said, adding: “If the pandemic ends with the vaccine, housing sales to foreigners will reaccelerate.”

On coronavirus’ impact on the Turkish construction sector, Yenigun said the sector will not achieve its target of $20 billion in 2020.

“We may make $10-12 billion this year when the first six-month data is considered,” he stated, citing that the normalization from the coronavirus has not fueled the sector considerably as flights operate partially and logistics are still disrupted worldwide.

On the memorandum of understanding (MoU) signed between Turkey and Libya last week to boost trade and economic ties, Yenigun said the move was welcomed by Turkish constructors.

“This is very important for us as there are projects which should be completed urgently especially in the field of education and health,” Yenigun said.

The MoU aimed to lay the groundwork for clearing up pending issues between Turkish firms and Libyan employers and making new investments.

Yenigun said the deal will pave the way for Turkish constructors to undertake new projects which will be announced by the Libyan government.

“We took $3 billion less work from the Gulf countries due to political strain with Turkey,” he elaborated.

Yenigun highlighted that Turkish constructors can focus on Indonesia during the post-pandemic period as the country plans to relocate the capital from Jakarta to the province of East Kalimantan.

“Indonesian minister of public works invited us to take part in this great investment but the presence of Japan, Korea and China is very strong,” he said.