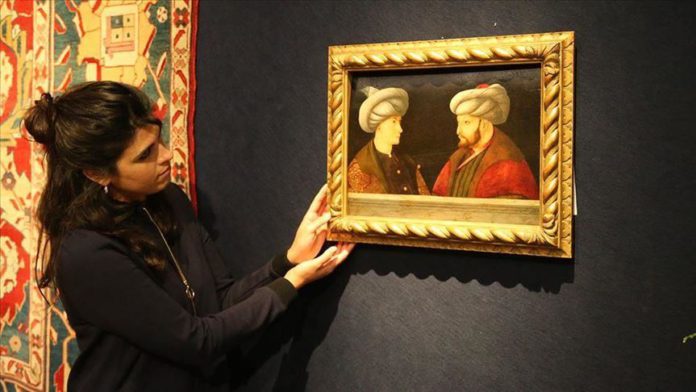 A portrait of Ottoman Sultan Mehmed II, known as Fatih Sultan Mehmet in Turkish, will be put up for auction in London on June 25.

Speaking to Anadolu Agency about the portrait, which is part of the auction house’s Islamic and Indian Art collection, Christie’s official Sara Plumbly said the work was unsigned.

Plumbly said one of the great mysteries of the portrait is the second figure depicted next to Fatih Sultan Mehmet.

“We don’t know who this other figure is. There have been a few suggestions — for instance, one of his three sons. But that does not seem to fit precisely how he is depicted in terms of the age that one of the sons would have been at the time. Some others suggest he might be a European dignitary. He is sort of clean-shaven. He does not have the beard you might expect from an Ottoman man.”

She pointed out that a second figure drawn on the same scale in portraits of Ottoman sultans is not a common practice.

“If you have another figure, he should be either a very important person or someone from the royal family.”

Stating that the portrait was estimated to have been made in the second half of the 15th century, Plumbly said another important aspect of the work is that it was one of only three portraits made during the Fatih era.

The other famous painting of Fatih was drawn by Bellini and has been in the collection of the National Gallery in London.
Mehmed II is the Ottoman sultan who conquered Istanbul and earned the title of Fatih (the Conqueror) at the age of 21 and levelled up a Turkish state into an empire that would rule regions in multiple continents for centuries to come.

The conquest of Istanbul is the best-known victory of Mehmed the Conqueror, but in subsequent years, he also ensured Ottoman control over Serbia, Morea and Trebizond (modern Trabzon) in the northern region of modern Turkey as well as Bosnia, Albania and some Anatolian (central Turkish) territories.

In over two dozen military campaigns during his reign, the emperor managed to conquer large swathes of territories, increasing Ottoman control to over 2.2 million square kilometers.

Palestine thanks Turkey for medical aid

Kremlin spokesman hospitalized due to COVID-19