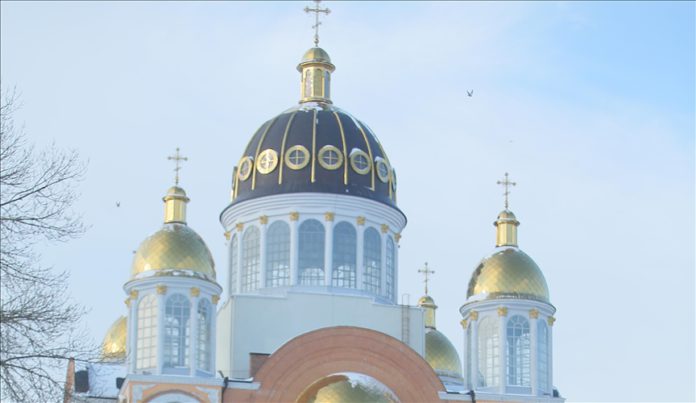 The Orthodox Church of Ukraine urged the international community on Thursday to stop “Russian and Belarus aggression.”

“Wherever possible, I ask you to regularly offer prayers for Ukraine, for victory, for our soldiers,” Metropolitan Epiphanius I, the Church’s primate, wrote on Twitter.

“God the Great, the One, save Ukraine for us!” he said.

And citing the Bible’s book of Isaiah 8:10, Epiphanius said: “Take counsel together, but it will come to nothing; Speak the word, but it will not stand, For God is with us”

The February 2014 “Maidan revolution” in Ukraine led to former President Viktor Yanukovych fleeing the country and a pro-Western government coming to power.

That was followed by Russia illegally annexing the Crimea region and separatists declaring independence in the Donetsk and Luhansk regions of Donbas in eastern Ukraine, both of which have large ethnic Russian populations.

As clashes erupted between Russian-backed separatist forces and the Ukrainian army, the 2014 and 2015 Minsk agreements were signed in Moscow after the intervention of Western powers.

The conflict, however, simmered for years with persistent cease-fire violations. As of February 2022, 14,000 people have been killed in the conflict in eastern Ukraine.

They claimed Russia was preparing to invade its western neighbor, allegations that were consistently rejected by Moscow.

Defying threats of sanctions by the West, Moscow officially recognized Donetsk and Luhansk as independent states earlier this week, followed by the start of a military operation in Ukraine on Thursday.

Russian President Vladimir Putin said the operation aims to protect people “subjected to genocide” by Kyiv and to “demilitarize and denazify” Ukraine, while calling on the Ukrainian army to lay down its arm