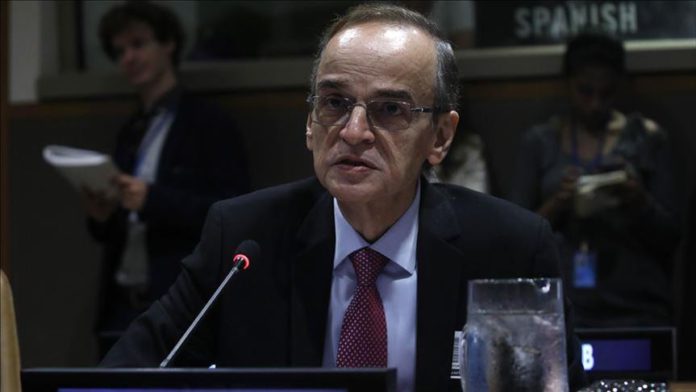 The opposition co-chair of the Syrian peace talks on a new constitution said Friday that the second day of restarted negotiations was generally positive, but he was not happy that the Syrian regime would not admit it was discussing the constitution while sovereignty was discussed.

The main opposition leader Hadi al-Bahra, former head of the Syrian National Coalition for Opposition and Revolutionary Forces and the meeting’s co-chair, addressed journalists as he left the talks.

He said he felt the regime side was trying to dodge, saying the discussions were on the constitution.

The peace talks between Syria’s Bashar Al-Assad regime and the opposition resumed Thursday in Geneva, the UN special envoy for Syria Geir Pedersen said, after some delegates had tested positive for the novel coronavirus.

Members of what is known as the “small group” responsible for the drafting of a new constitution for the war-torn country met again after days at the UN Geneva Office. The group consists of 15 members from the regime, non-governmental organizations and the Syrian opposition.

“We started these talks with the goodwill from our side. We are trying to win some commonality between them and us tomorrow, at least for a few items in common so that they could be thrown in as an agenda for the upcoming meetings,” said al-Bahra.

However, the opposition-co chair said he was not happy that the other side tried to say the talks were “pre-constitutional,” even though they were discussing sovereignty.

Ahmed Kuzbari, the co-chairman of the regime, addressed journalists earlier speaking only in Arabic and said the meeting had stuck to the agenda.

Kuzbari reacted to a meeting of the US Special Representative for Syria James Jeffrey with the opposition members on Monday.

“Jeffrey met with the opposition delegation just before the start of the third round of talks. What does this mean? There was a clear intervention of the US in the work of the committee. We absolutely do not accept this,” he said.

After the meetings take place in two sessions on Saturday, the tour talks will end. Al-Bahra said he hopes they will continue in September.