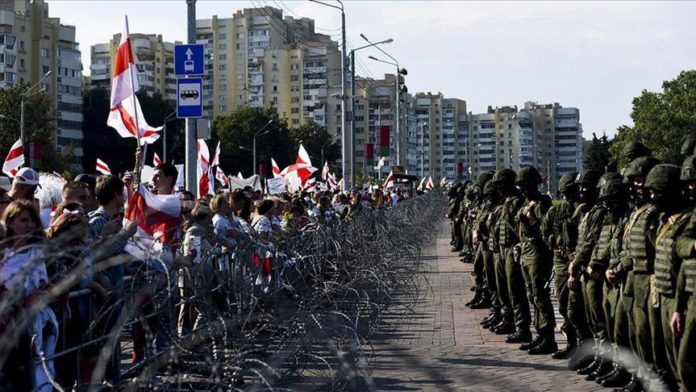 Opposition in Belarus opted for different methods from using women and children on the front lines of protests to calling for not paying taxes and not sending children to public schools.

Opposition groups in the country have occasionally exercised for future protests with organized small-scale demonstrations on social media against the administration that did not take quarantine measures for COVID-19 during the pre-election days.

During the process of collecting the signatures for the presidential candidates, the opposition formed long lines in front of the signature tables set up in the city squares and spread photos on social media to give the image that they had the majority.

Alexander Lukashenko opponents were organized on social media as the Aug. 9 elections approached.

Particularly the social media application Telegram, which enables confidential correspondence and does not keep content records on its servers, was widely used.

A Telegram account opened by a Belarusian opponent’s 22-year-old son, who fled to Poland, coordinated the actions of thousands of opposition groups.

Through the application, the content, date, time and even the varying routes of the protests were reported to the protesters live.

The opposition, who asked its fans to wear white bracelets and take photos of the ballot they voted for, argued that in this way, the real figures will emerge after the elections.

However, after the elections, the opposition covered up this issue and focused on protests.

Protests started before end of voting

The opposition started protests before the voting was over. On the evening of the election, groups of young people were organized under the leadership of masked people who took to the streets.

While the police wanted to prevent unauthorized demonstrations, they intervened harshly in the face of provocations and escalation.

The parts where provocateurs attacked the police were deleted through the Telegram account managed in Poland, and instead images showing only the harsh intervention of the police were shared and spread rapidly.

There were incidents between the police and the demonstrators for three days. Police detained about 6,000 people.

This led to a great reaction from Europe to the Belarusian administration, when the Western media, which supported the opposition, reported only the police intervention footage from the Telegram account.

Knowing that Lukashenko’s great support was the security forces and the military, the opposition tried to discredit these groups.

Serious threat campaigns were launched against members of the security forces and their families. The opposition has openly promised the commander and police chiefs, who will resign, to buy houses.

Protesters, acting within the framework of daily instructions on Telegram, took to the streets every day demanding Lukashenko’s resignation.

They also tried to paralyze the daily life by blocking city roads. Protesters gathered in front of buildings of state television channels and threatened the employees, declared the members of the press who did not resign as “enemies of the people”.

The protesters who could not get results from this, further called for a work stoppage at the state-owned factories and enterprises that provide foreign currency inflows to Belarus and are the backbones of the economy.

The opposition pledged to raise money for workers participating in the stoppage action and to give each worker €1,500 (around $1,780) for three months.

The opposition called on families not to send their children to primary schools, and for children to receive education at home or private school, not in public schools, and demanded action from students in universities. Some universities saw protests only with a low participation, and were prevented in a short time.

The protesters, who could not get what they expected from educational institutions, tried to implement instructions that would completely disrupt the social order through the Telegram channel.

In the announcements, citizens were asked not to pay bills and taxes for basic services such as electricity and water, and individuals were asked to establish a “virtual parallel state structure” by creating ministries among themselves.

While the opposition encouraged IT workers to leave Belarus and go to European countries, opposition hackers attempted to attack the websites of official institutions.

But these calls did not get sufficient response from the society.

Women and children played a huge part in the protests.

Some universities and even secondary school students were organized against police intervention, while some women brought their children to protests in strollers.

On certain days, the opposition organized groups consisting mainly of women and brought them in the front lines. Women tried to prevent police from detaining male protesters.

This tactic of the opposition prevented the police from dispersing illegal demonstrations using water cannons or force.

Although those representing the opposition occasionally said they were not affiliated with the said Telegram account that coordinated the protests, they supported the protests in line with the instructions from this account.