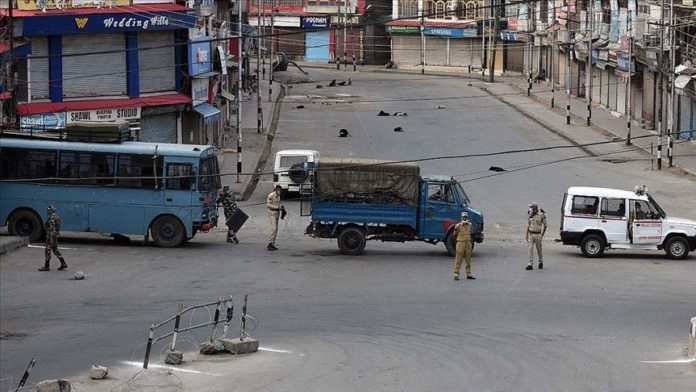 The writer is the secretary-general of the World Kashmir Awareness Forum.

Michelle Bachelet, the UN High Commissioner for Human Rights deserves an appreciation to acknowledge that, “a world with diminished human rights is a world that is stepping back into a darker past when the powerful could prey on the powerless with little or no moral or legal restraint”.

Ambassador Volkan Bozkir, the president of the UN General Assembly assured to become the voice of the oppressed people all over the world when he said on Sept. 14, 2020: “People in need or under oppression should feel that their concerns are being heard in the UN’s most democratic body. I will work to bring the voices of the world’s people into our discussions.”

“Ruled as the world is by certain dominant elements and the policies and postures issuing from their entanglements, it is hard to keep international attention focused on a people and their situation in the light, not of power strategies but of undying principles of peace and justice, the principles that were enshrined in the UN Charter and the Universal Declaration of Human Rights. In the case of Kashmir, a people were first turned into a dispute and then the dispute was consigned to oblivion. “said Yusuf Buch, a former Pakistani envoy, who also served in the cabinet of UN secretary-general from 1978-91.

The Universal Declaration of Human Rights (UDHR) on its 72nd anniversary needs to be analyzed objectively. Everyone knows that fundamental human rights are universal. The declaration knows no religious, national, or political boundaries. And it is not hierarchical, like caste systems or monarchies. Everyone stands on the same plane when human rights are an issue. Even if all of its lofty provisions safeguarding fundamental human freedoms and liberties remain dishonored in many parts of the globe, the declaration still stands as a moral reproach to wrongdoing nations that may facilitate reforms.

It might be said that never have so many human rights been proclaimed yet been so routinely violated. Think of the ongoing human rights atrocities that are going unsanctioned. Myanmar, where the Muslim civilian population is routinely driven out from homes and cities are consistently destroyed. Tragic genocide in Syria. Death and destruction in Yemen. Denial of the Palestinian demand to exercise the right to self-determination. Kashmiris brutalized by 900,000 Indian military and paramilitary forces. The list goes on and on.

Tragically, civilized nations have fallen from their lofty calling; namely, human rights for all mankind. There is a sad commentary on the state of human rights all over the globe. It seems to me that until there evolves a generally accepted moral duty among peoples and nations to assist all victims of widespread human rights violations by force or other stiff retaliation, human rights enforcement mechanisms will operate haphazardly and whimsically for reasons unrelated to the harm to the victims or the villainy of the perpetrators. It is the job of all human rights champions and defenders to jump-start that moral evolution.

If we were to judge the UN-based upon its history of involvement in efforts to resolve international conflicts, the simplest answer is that it has been an enormous failure. The UN of course is a far more complex organization whose work covers such a wide range of activities that conflict resolution is only one aspect of its work. Nevertheless, if we consider the fact that its fundamental mission was to be a means of preventing global catastrophes like WW II, then conflict resolution would have to be considered job one.

The urgency of adding teeth to human rights is felt everywhere. On that count, the news is less auspicious. The UN should officially declare that under international law and human rights covenants, every government official is vulnerable to criminal prosecution in every nation in the world for either direct or indirect complicity in human rights violations. Every alleged victim of a human rights violation or his or her relatives should be entitled to sue the alleged official culprits in the World Court to make it clear that nobody is above the law.

The barbaric situation in Bosnia, Kosovo, Syria, and elsewhere has outraged the world and caused regrets that the enormous toll of human lives was not averted by timely action at an earlier stage. The failure of the international community can be explained but not denied. Yet in another part of the globe ‑ the Indian occupied Kashmir — atrocities of a similar pattern have been, and are being, perpetrated with no fear of a corrective international response. To date, no one power or combination of powers has blown the whistle.

The Kashmir question is one of the oldest unresolved international disputes in the world. The issue has been pending on the agenda of the Security Council since 1948. At that point, an agreement took place between India and Pakistan, endorsed by the UN that guarantees the right to self-determination to the people of Jammu and Kashmir. The people of Kashmir who have never lost hope in the UN have since that date sought to freely exercise their right to self-determination. India, however, was soon undeceived of its delusions over Kashmir’s political yearning. Recognizing that its people would never freely vote for accession to India, it contrived excuse after excuse to frustrate a plebiscite. India’s proclamation has never been accepted by the UN, which continues to list Kashmir as a disputed territory.

The seeming conspiracy of silence over gross affronts to the UDHR in Indian-occupied Kashmir — an occupation which itself violates still binding UN Security Council resolutions — is worrisome. That unheroic muteness has emboldened India to a chilling campaign of human rights atrocities against innocent Kashmiris. The 900,000 Indian military and paramilitary forces operate outside the rule of law under the protective umbrella of an Indian immunity statute. Egregious human rights violations are commonplaces; involuntary disappearances, extrajudicial killings, rape, torture, plunder, abductions, mutilations, arbitrary detentions, etc. It is even a crime to advocate the implementation of the UN Security Council resolutions, a shocking affront to the Security Council itself.

Every human rights organization that has witnessed the gruesome Kashmiri scene is shocked. The atrocities pale in comparison to East Timor or Southern Sudan. India’s leaders are guilty of war crimes, crimes against humanity, and aggressive war on a scale vastly greater than Slobodan Milosevic and his sub-villains. But they do not make the same impact because India is adamant against unchaperoned broadcast and media from abroad. Thus, no CNN or BBC heart clutching pictures to move the world. Kashmir is thus reduced to an insignificant inkblot on the map. New York-based Committee to Protect Journalist has reported that the media in Kashmir have been pushed to the brink of extinction.

According to expert consensus, Kashmir is the most densely soldiered and most nuclear combustible territory on the planet. It stands apart as the most cantankerous of conflicts, with the catastrophic possibility of nuclear devastation. After all, India and Pakistan have fought three wars and nearly began a fourth with the ever-present threat of nuclear exchange.

The lesson of history — both old and new — is that peace is impossible if a people or nation is treated as a negotiable pawn by big powers. The most harrowing example is the appeasement of Hitler at the expense of the Sudetenland and Czechoslovakia.

Self‑determination, despite big power politics, has blossomed into a pivotal element in international relations in recent times. It has proven the key to resolving long-festering disputes and unforgiving conflicts.

Exemplary has been Namibia, East Timor, Eritrea. Kosovo, Montenegro, Southern Sudan, etc. In each case, self‑determination was fueled by oppressive rule, whether foreign or otherwise. They also derived strength from international law and resolutions of the UN Security Council. Let us hope that the stage is set to put the Kashmir conflict on a road to a durable and permanent settlement.

It is time that the UN secretary-general intercedes in the disputed territory (so listed by the UN), appoints a special envoy on Kashmir, and, insists that the genuine political voice of the Kashmiri people, be a full partner in all negotiations over Kashmir’s political destiny. As Syed Nazir Gilani has advocated it well in these words: “The gross and systematic violation of human rights, continued noncompliance of UN Charter obligations and occupation of a people waiting for an UN-supervised Plebiscite, makes a strong case of intervention.”

Cricket: Ban on use of saliva leaves pacers toothless