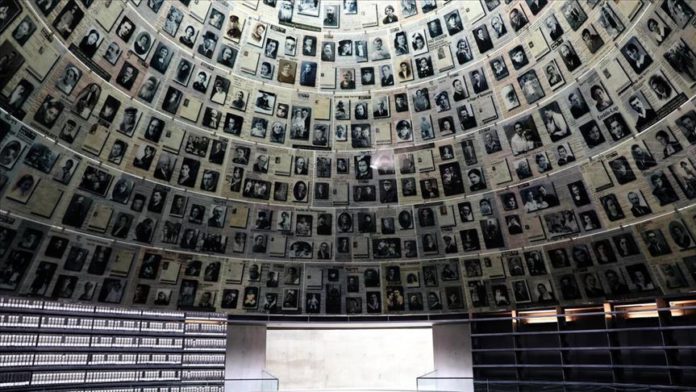 *The writer is a senior journalist at Anadolu Agency.

It is not easy to hold emotions, after visiting the Holocaust Museum in the heart of West Jerusalem. In dim lights, getting transported into history, with slow gloomy music playing in the background, videos and pictures of trains whistling the past carrying Jews to concentration camps, shrieks of people being lashed and dragged to gas chambers melts even the stone-hearted person.

After experiencing such inhuman treatment, it was expected that the victims and their progeny would respect the values of humanity. But just years after World War II ended, the newly born Jewish state Israel began heaping a similar treatment on Palestinians and continues to rob them of their lives and livelihood.

And those in the West, who perpetuated inhuman crimes on Jews in the early 20th century, have now turned to Muslims as new punching bags. While promoting Islamophobia, they do not leave any occasion to attack Muslims and their symbols to make them feel mediocre.

Whether Danish cartoon issue of 2005 or a decade later Dutch parliamentarian Geert Wilders adding fuel to the fire by announcing a contest of cartoons depicting Prophet Muhammad or Charlie Hebdo, a French satirical weekly, joining them, the West takes shield of freedom of speech and expression to dismisses concerns of hurt Muslims. The reaction of protesting Muslims is dismissed as narrow mindedness contrary to modern-day values of democracy.

The trend to hurt Muslims is not now confined to the West only. In India — the largest democracy in the world — a pattern is emerging to incite the Muslim community by targeting the Prophet and his family members. The only silver lining is that unlike France, the government has not approved such things directly. But the inaction against hate-mongers speaks volumes.

Like senior journalist and former Secretary-General of Press Club of India Pushpendra Kulshrestha, several persons have been relentlessly posting blasphemous videos, contributing to Islamophobia. Many people, who have worked in the IT cell of the ruling Bharatiya Janata Party (BJP) have come on record, claiming that they were given specific training to incite and hurt feelings of the Muslim community.

Under garb of freedom of expression

All this is done under the garb of freedom of expression, although the Indian constitution explicitly puts reasonable restrictions on the exercise of this right. Indian courts have made it clear that free expression cannot be equated or confused with a license to make unfounded and irresponsible charges or inciting hatred. Seven acts like defamation, contempt of court, the security of the state, damaging friendly relations with other states, inciting people to commit offense, sedition, and acts that perturb public order and peace have been kept out of the purview of the freedom of speech.

More than 100 books stand banned in India. Only recently a book Adivasis Will Not Dance authored by Hansda Sowvendra Shekhar was banned. Earlier in 2015 another book by Tamil writer Pramul Murgan was not only banned, but its publishers were directed to burn all copies on their shelf. The author had challenged an ancient custom of Hinduism called Niyog, under which a childless woman is allowed to have physical relations outside marriage.

Similarly, the European countries also have put reasonable restrictions on freedom of expression. If that was not so, the courts in various European countries could not have prosecuted and sentenced authors, artists, and political activists, who indulge in the denial of the Holocaust. Since 1998, so far 20 people have been prosecuted and awarded severe sentences, with penalties for denying the Holocaust.

While there is no disagreement on keeping the Holocaust under the ambit of reasonable restrictions, there cannot be dual standards while demarcating boundaries of freedom of expression.

Freedom of expression is a fundamental human right that needs to be upheld, but no civilized society can swallow absolute freedom, which only means anarchy. Such a situation will prove the maxim, might is right, and seize rights of weaker sections. Therefore, journalistic freedom, though invaluable cannot be used to heap insults on Muslims and create a situation that was created for Jews in the early 20th century.

The need of the hour is to promote tolerance, liberal attitudes, pluralistic values and to develop an enduring attitude to bear each other. Muslims living in the West also need to reach out to people, instead of ghettoizing themselves. Their reactions should not be rash but with the logic that fits into the persona of the Prophet. Leading Pakistani Islamic scholar Muneer Ahmed Khalili has mentioned that Muslims have failed to tell the world that Holy Quran does not belong to Muslims, but to humanity, and they do not have any exclusivity on Prophet Muhammad, as he is blessing and mercy, for the whole mankind.

An acclaimed Leftist ideologue Kobad Gandhi, who spent some years in Delhi’s Tihar Jail was put in a cell with a fellow Muslim prisoner for some months. After his release, he said that he came to know the first time that many values of communism had been preached in the Arab world 1,400 years ago by Prophet Muhammad.

While it is time for Muslim organizations to reach out, a bigger duty rests on the shoulders of heads of Muslim nations, and more so on the Organization of Islamic Cooperation (OIC). A few years ago, Saudi Arabia decided to terminate its diplomatic and trade relations with Canada, just because Toronto had raised concerns about human rights violations in the country. But the country never adopted such an attitude with those countries, who are responsible for hurting Muslim sentiments. It is the insensitivity of Muslim rulers largely and shameless attitude that gives fuel to such elements to target Muslim symbols and the Prophet.

There is an urgent need for the OIC to call a session of its leaders and collectively take the lead in breaking this cycle of hate caused by Islamophobic acts. Similar red lines need to be drawn, which should define and ban blasphemous acts against religious symbols as Israel has drawn in the case of Holocaust denial and anti-Semitism. If any country, group, or individuals crosses such redlines, they should be made to pay the costs.

Pakistan Prime Minister Imran Khan rightly put out in a letter to heads of Muslim nations that blasphemy against any prophet, including those of Christianity and Judaism, should be “unacceptable”. The world cannot continue on a hate spiral which only benefits extremists and not only make the world more dangerous but prepare raw minds for another Holocaust.